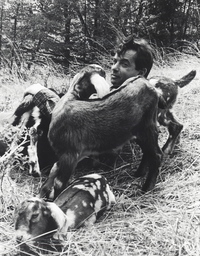 Born
The United States
Genre
Literature & Fiction
edit data
Brad Kessler’s novel Birds in Fall won the Dayton Literary Peace Prize. His other books include Goat Song, Lick Creek, and The Woodcutter’s Christmas. His work has appeared in The New Yorker, The Nation, The Kenyon Review, and BOMB, as well as other publications. He is the recipient of a Whiting Writers’ Award, a National Endowment for the Arts fellowship, and the Rome Prize from the American Academy of Arts and Letters.

"In Bed" with Brad Kessler
Basho shows that a haiku can express as much—more—than a page of prose. It's not the amount of words you throw at a given thing—but the words one...
Read more...
5 likes · 2 comments
Quotes by Brad Kessler  (?)
Quotes are added by the Goodreads community and are not verified by Goodreads. (Learn more)
“A book is like a key that fits into the tumbler of the soul. The two parts have to match in order for each to unlock. Then—click—a world opens.”
― Brad Kessler, Goat Song: A Seasonal Life, A Short History of Herding, and the Art of Making Cheese
tags: reading-books
51 likes
Like

“She'd observed this before: how -- ironically -- it took death to make one feel momentarily alive, truly present, minute to minute.”
― Brad Kessler, Birds in Fall
3 likes
Like

“In April, he perched on a witch hazel branch, shivering, one eye closed, waiting for the sun to warm his wings. The night had been particularly cold, the winter long, the fishing scarce.
He'd been alone all the time.
When the sun appeared, the warmth felt good on his wings. he lifted from his perch, wheeled, then cackled over the river, studying the surface for the slightest flash: a trout, a small shad, a frog. He lit on a willow snag downriver and sunned himself, raised his tail, shat, and called again. The days were growing longer now, the alewives ascending the streams. The year before, he'd built his nest near the estuary in a seam of clay, and soon - if she returned - the time would come for a new nest along the bank.
The kingfisher fished all morning. He returned to the willow snag at noon; slept, then woke shortly after, startled by the call. Was it she? They hadn't seen each other since the summer before.
He dropped from the branch, called, winged downriver, his image doubled in the water. He heard the call again, closer now. If she returned, he'd dive into the river, greet her with a fish, fly around her, feed her beak to beak. If she returned, he'd begin to exxcavate a new nest, claw clay out of the earth, arrange the perfect pile of fish bones to lay their eggs upon.
He pumped his wings harder now. He heard the cackle closer, louder more insistent. he recognized her voice. She was hurling her way upriver.
Any moment now: she'd fly into his vision.”
― Brad Kessler, Birds in Fall
2 likes
Like

Is this you? Let us know. If not, help out and invite Brad to Goodreads.