,
Discover new books on Goodreads
See if your friends have read any of Kristin Kobes Du Mez's books 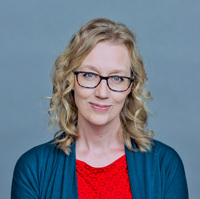 Website
https://kristindumez.com/
Twitter
kkdumez
Genre
History, Biography, Religion
Member Since
June 2020
URL
https://www.goodreads.com/kdumez
edit data
Born and raised in Iowa with brief sojourns in Tallahassee, FL, and Ostfriesland, Germany. PhD from the University of Notre Dame, and now I reside in Grand Rapids, MI. I have 3 kids, 2 chickens, and a dog, and I write on gender, religion, and politics.

More of Kristin's books…
Quotes by Kristin Kobes Du Mez  (?)
Quotes are added by the Goodreads community and are not verified by Goodreads. (Learn more)
“Christian nationalism—the belief that America is God’s chosen nation and must be defended as such—serves as a powerful predictor of intolerance toward immigrants, racial minorities, and non-Christians.”
― Kristin Kobes DuMez, Jesus and John Wayne: How White Evangelicals Corrupted a Faith and Fractured a Nation
14 likes
Like

“Evangelicals hadn’t betrayed their values. Donald Trump was the culmination of their half-century-long pursuit of a militant Christian masculinity. He was the reincarnation of John Wayne, sitting tall in the saddle, a man who wasn’t afraid to resort to violence to bring order, who protected those deemed worthy of protection, who wouldn’t let political correctness get in the way of saying what had to be said or the norms of democratic society keep him from doing what needed to be done. Unencumbered by traditional Christian virtue, he was a warrior in the tradition (if not the actual physical form) of Mel Gibson’s William Wallace. He was a hero for God-and-country Christians in the line of Barry Goldwater, Ronald Reagan, and Oliver North, one suited for Duck Dynasty Americans and American Christians. He was the latest and greatest high priest of the evangelical cult of masculinity.”
― Kristin Kobes DuMez, Jesus and John Wayne: How White Evangelicals Corrupted a Faith and Fractured a Nation
10 likes
Like

“The products Christians consume shape the faith they inhabit. Today, what it means to be a “conservative evangelical” is as much about culture as it is about theology.”
― Kristin Kobes Du Mez, Jesus and John Wayne: How White Evangelicals Corrupted a Faith and Fractured a Nation
9 likes
Like