Discover new books on Goodreads
See if your friends have read any of D.L. Jackson's books 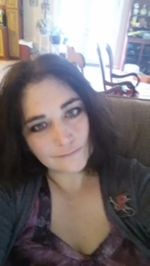 If you liked This Endris Night, you'll be excited to know Lucas's story is coming on 04/04/17. After several reader requests asking what happened to the protagonist in This Endris Night, my bad boy, alien hunter, I decided to give you the story of a dangerous man finding love when he least expects it. I hope you'll check it out.

“He moved into a large sitting area, past a sunken bath that could fit ten and through a set of double doors, where he tossed her on the bed. She bounced as she hit and looked up. He didn’t break eye contact as he shed his jacket, tossing it over on a chair. “Strip.”

Frank toed off his shoes and loosened his tie, pulling it over his head then dropping it to the floor. “Tell you what. Whoever’s naked first, gets to be on top.” He gave her a lecherous grin and was rewarded with a rosy blush, coloring her cheeks.

“Okay.” She climbed off the bed. “On the count of three.”

“One,” Frank said and lifted his hands to the top of his dress shirt. She did the same, bracing for the count like a racer on the blocks, her hands behind her neck. “Three.” Frank unbuttoned the collar, and tugged the shirt over his head, including the T-shirt underneath.

“That’s cheating,” she said, as she fumbled with the hooks down the back of her blouse.

“You had a head start. I’m evening the field.” He ripped his belt off and undid his fly and dropped his boxers and pants all at once.

She froze and gasped, staring, hunger in her eyes, snapped out of the spell and tossed her blouse and bra to the side, moving fast, but not fast enough. Her skirt puddled around her ankles as Frank stood, as bare as the day he was born.

“I win.” She kicked her garment to the side and placed her hands on her hips. Her chest rose and fell, pebbled nipples displayed against gloriously soft skin and full breasts. Her eyes were wild and her soft blonde hair tousled, like she’d already taken a roll in the sack. Man, did he want to make a bigger mess of it.”
― D.L. Jackson, My Boogie Woogie Bugle Guy

“to some asshole who has more credit in his pockets than I do? Not going to happen.”
― D.L. Jackson, Slipping the Past
0 likes
Like

“Noni grabbed her hand, pried it open, and dumped the sparkly nipple covers into her palm. “They’re called pasties. You put them on your boobies, dear.”
“What?” Lannie blinked. Of course she knew where they went. That her grandmother knew, well, proved to be a bit disturbing.”
― Shockwave ~ D. L. Jackson
tags: shockwave
0 likes
Like

“My name is Olivia Braun. I am the only surviving relative to the leaders of Aeropia, a legacy I am not proud of, but one I must set straight before I walk into the next life.
I am not a child. Many have looked at me and thought that. Small and weak, so insignificant, they believed me a frail little girl. I wasn’t. I am a survivor. I’ve lived through more than you can imagine, in a world where two wrongs made a right and deciding which side of the line you stood on was as important as taking your next breath.”
― Clone The Book of Eva D. L. Jackson
tags: clone, d-l-jackson, eva, olivia, speculative-fiction
0 likes
Like

Ask Annie Nicholas — 69 members — last activity Jun 15, 2013 01:43PM
Bestselling author Annie Nicholas will be available on June 15th to discuss any question you may have about her books and series.
More of D.L.’s groups…

Hey DL - congrats on the new release and we're so happy to be throwing you a Cyber Launch Party today!!! Have fun with it and best of luck with the new book!

LAST FLIGHT OF THE ARK by D.L. Jackson

Twelve hours outside of Terra II, Colonel Kaleb Titan, a molecular geneticist and commander of the Ark, faces a life or death choice that could change the fate of mankind.

The Genesis I, aka the Ark, travels with a hold full of wildlife and three crew members. When a wolf bite and genetically-altering gamma radiation transform Kaleb, he notices his senses have been heightened, his libido has gone haywire and he can't keep his hands off his crew. Worse yet, they don't seem inclined to stop him.

When their sister ship, the Genesis II arrives early, Kaleb's problems compound. As soon as the command crew of the Genesis II boards, one whiff tells Kaleb they're not from Earth or who they appear to be.

When he discovers that they've kept the Genesis II's crew of over two thousand alive, he begins to believe their reasons may be far more ominous than anyone could have imagined. However, he also discovers what's holding them back. The hijackers seem to be allergic to canines.

WIN - Leave D. L. a comment or question today at www.CyberLaunchParty.blogspot.com and your name goes in the hat for a free download of her new book! Please leave your email address so we can contact you if you are today's winner. Good luck!