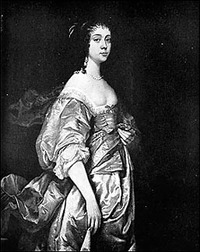 Born
in Colchester
January 01, 1623
Died
December 15, 1673
Website
http://www.digitalcavendish.org/
Genre
Philosophy, Poetry, Plays
edit data
Margaret Lucas Cavendish, Duchess of Newcastle, was the youngest child of a wealthy Essex family. At the age of 20 she became Maid of Honour to Queen Henrietta Maria and traveled with her into Persian exile in 1644. There she married William Cavendish, Marquis (later Duke) of Newcastle.

Between 1653 and 1668 she published many books on a wide variety of subjects, including many stories that are now regarded as some of the earliest examples of science fiction.

“I am not covetous, but as ambitious as ever any of my sex was, is, or can be; which makes, that though I cannot be Henry the Fifth, or Charles the Second, yet I endeavour to be Margaret the First; and although I have neither power, time, not occasion to conquer the world as Alexander and Caesar did; yet rather than not be mistress of one, since Fortune and Fates would give me none, I have made a world of my own; for which nobody, I hope, will blame me, since it is in everyone's power to do the like.”
― Margaret Cavendish - Dutchess of Newcastle
tags: authorship, creativity, this-blazing-world, writing
12 likes
Like

“Women's Tongues are as sharp as two-edged Swords, and wound as much, when they are anger'd.”
― Margaret Cavendish
tags: anger, temper, women, words
9 likes
Like