Discover new books on Goodreads
See if your friends have read any of Jackson C. Garton's books 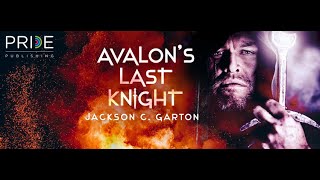 Follow him for updates on Instagram @jacksonwritesfiction, on Twitter @jacksoncgarton, on Facebook @gartonjc, on Pinterest @gartonjc, on BookBub @jackson-c-garton, and on his blog at www.theywritefiction.com. Equal parts dandy and disaster, Jackson C. Garton is a writer and LGBTQ activist hailing from the hills of Appalachia. He currently resides in Central Kentucky with his husband, child, and four cats. When Jackson isn't reading or writing, you can find him examining people's natal charts, researching queer history, planning his next ghost hunt, or milling about the supernatural section of his local bookstore.

“Damen said, with helpless honesty, "Laurent, I am your slave."

The words laid him open, truth exposed in the space between them. He wanted to prove it, as though, inarticulate, he could make up for what divided them. He was aware of the shallowness of Laurent's breath, it matched his own; they were breathing each other's air.

He reached out, watching for any hesitation in Laurent's eyes. The touch he offered was accepted as it had not been last time, fingers gentle on Laurent's jaw, thumb passing over his cheekbone, soft. Laurent's controlled body was hard with tension, his rapid pulse urgent for flight, but he closed his eyes in the last seconds before it happened. Damen's palm slid over Laurent's warm nape; slowly, very slowly, making his height an offering, not a threat, Damen leaned in and kissed Laurent on the mouth.

The kiss was barely a suggestion of itself, with no yielding of the rigidity in Laurent, but the first kiss became a second, after a fraction of parting in which Damen felt the flicker of Laurent's shallow breathing against his own lips.

It felt, in all the lies between them, as if this was the only true thing. It didn't matter that he was leaving tomorrow. He felt remade with the desire to give Laurent this: to give him all he would allow, and to ask for nothing, this careful threshold something to be savoured because it was all Laurent would let himself have.”
― C.S. Pacat, Captive Prince: Volume Two
tags: lovely-words, lovely-writing, m-m-love, m-m-romance
46 likes