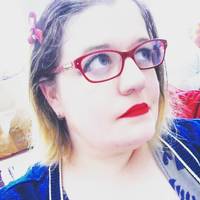 Born
in Australia
February 06
Website
http://www.maryborsellino.com/
Twitter
sharpest_rose
Genre
Literature & Fiction, Entertainment, Young Adult
Member Since
October 2010
edit data
Mary Borsellino has written fiction and essays about sci-fi and fantasy, including a book of academia about Robin the Boy Wonder and a critically acclaimed novel about what the Devil likes about rock and roll. She lives in Australia.

I did quality assurance on the title Real Life Plus Ver. Kaname Komatsuzaki, which can now be found on the games page.

“As soon as teenage girls start to profess love for something, everyone else becomes totally dismissive of it. Teenage girls are open season for the cruelest bullying that our society can dream up. Everyone's vicious to them. They're vicious to each other. Hell, they're even vicious to themselves. It's terrible.

It's used as the cheapest, easiest test of crap, isn't it? If teenage girls love a movie, a book, a band, then it's immediately classified as mediocre shit. Well, I'm not going to stand for that. Someone needs to treat them like they're precious, and if nobody else is ready to step up, I guess it's up to us to put them on the path to recognizing that about themselves.”
― Mary Borsellino, The Devil's Mixtape

“Schools teach kids the greatest love story of all literature is the one where a 19-year-old guy and his 13-year-old girlfriend rack up a body count and then kill themselves together. Then when kids learn the lesson, everyone blames pop music.”
― Mary Borsellino, The Devil's Mixtape
7 likes
Like