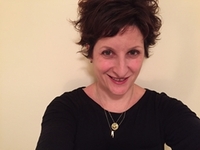 Twitter
MegLeder.
Genre
Contemporary, Romance
edit data
A former bookseller and teacher, Meg Leder currently works as a book editor in New York City. Her role models are Harriet the Spy and Anne Shirley. She is the coauthor of The Happy Book, and spends her free time reading, looking for street art, and people watching. She lives in Brooklyn, New York.

“Just because someone isn't at their best doesn't mean you write them off forever" -Pen”
― Meg Leder, The Museum of Heartbreak
5 likes
Like

“Little parts of my heart break off then, for Finn, for Ruby, for Charlie, for me, for all the ways we've let ourselves become who people think we should be instead of who we really are.”
― Meg Leder, Letting Go of Gravity
tags: being-yourself, introspection, realization
5 likes
Like

“I stared at Eph, envying the fact that he already had a costume, though whether it was actually qualified as a costume was debatable. He was dressed in all black- black jeans, black knit hat, black boots, long-sleeved, black T-shirt, black thermal on top of it.
"I'm the dark night of the soul. Or a black hole. Or something like that," He'd said when I'd asked him earlier.
"You're copping out," I said.
"How is being in more than one costume copping out? I'm actually so investing in this, I am in an infinite number of costumes. It's meta and crap.”
― Meg Leder, The Museum of Heartbreak
tags: humor
5 likes
Like

Is this you? Let us know. If not, help out and invite Meg to Goodreads.