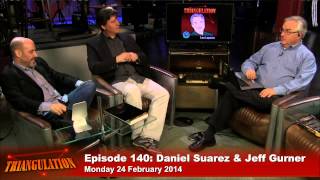 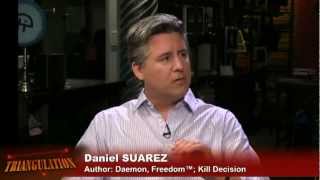 The book -- which will hit stores on Feb. 20 via the publishing house Dutton -- centers on a world in which decades of technological advances have been suppressed in an effort to prevent disruptive change.
View more on Daniel Suarez's website »
26 likes · Like  •  7 comments  •  flag

“Her new boss was an undead automaton from hell, true. But, no job is perfect.”
― Daniel Suarez, Daemon
52 likes
Like

“Anyone who has ever tried to share pizza with roommates knows that Communism cannot ever work. If Lenin and Marx had just shared an apartment, perhaps a hundred million lives might have been spared and put to productive use making sneakers and office furniture.”
― Daniel Suarez, Daemon
28 likes
Like

“In all, his outfit required nearly two thousand man-years of research and development, eight barrels of oil, and sixteen patent and trademark infringement lawsuits. All so he could possess casual style. A style that, in logistical requirements, was comparable to fielding a nineteenth-century military brigade.
But he looked good. Casual.”
― Daniel Suarez, Daemon
tags: fashion, humor
17 likes
Like