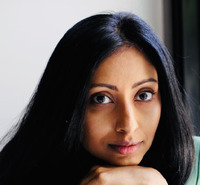 “It must be the worst kind of suffering – cognizance of one’s own collapse, the penance of watching as things slip away.”
― Avni Doshi, Girl in White Cotton
5 likes
Like

“Reality is something that is co-authored,’ the woman says. ‘It makes sense that you would begin to find this disturbing. When someone says that something is not what you think of it as, it can cause slight tremors in the brain, variations in brain activity, and subconscious doubts begin to emerge. Why do you think people experience spiritual awakenings? It’s because the people around us are engaged. The frenzy is a charge that’s contagious.’ ‘Are you saying my mother is contagious?’ ‘No, I’m not. Though maybe I am, in a sense. We actively make memories, you know. And we make them together. We remake memories, too, in the image of what other people remember.’ ‘The doctor says my mother has become unreliable.’ ‘We are all unreliable. The past seems to have a vigour that the present does not.”
― Avni Doshi, Burnt Sugar
3 likes
Like

“Morning is the time for deep breaths, and discovering, ourselves anew in our bodies”
― Avni Doshi, Burnt Sugar
3 likes
Like

“Until I feared I would lose it, I never loved to read. One does not love breathing.”
― Harper Lee, To Kill a Mockingbird
tags: reading
13138 likes
Like

“People are all over the world telling their one dramatic story and how their life has turned into getting over this one event. Now their lives are more about the past than their future.”
― Chuck Palahniuk, Invisible Monsters
tags: future, human-nature, past
652 likes
Like

A lush-bodied girl in the prime of her physical beauty. In an ivory georgette-crepe sundress with a halter top that gathers her breasts up in soft undulating folds of the fabric. She's standing with bare legs apart on a New York subway grating. Her blond head is thrown rapturously back as an updraft lifts her full, flaring skirt, exposing white cotton panties. White cotton! The ivory-crepe sundress is floating and filmy as magic. The dress is magic. Without the dress the girl would be female meat, raw and exposed.

She's not thinking such a thought! Not her.

It's nighttime in Manhattan, Lexington Avenue at 51st Street. Yet the white-white lights exude the heat of midday. The goddess of love has been standing like this, legs apart, in spike-heeled white sandals so steep and so tight they've permanently disfigured her smallest toes, for hours. She's been squealing and laughing, her mouth aches. There's a gathering pool of darkness at the back of her head like tarry water. Her scalp and her pubis burn from the morning's peroxide applications. The Girl with No Name. The glaring-white lights focus upon her, upon her alone, blond squealing, blond laughter, blond Venus, blond insomnia, blond smooth-shaven legs apart and blond hands fluttering in a futile effort to keep her skirt from lifting to reveal white cotton American-girl panties and the shadow, just the shadow, of the bleached crotch.

Now she's hugging herself beneath her big bountiful breasts. Her eyelids fluttering. Between the legs, you can trust she's clean. She's not a dirty girl, nothing foreign or exotic. She's an American slash in the flesh. That emptiness. Guaranteed. She's been scooped out, drained clean, no scar tissue to interfere with your pleasure, and no odor. Especially no odor. The Girl with No Name, the girl with no memory. She has not lived long and she will not live long.”
― Joyce Carol Oates, Blonde

“I walked into a white city. It was a honeycomb of ivory-white cells, streets like ribbons of old ermine. The stone and mortar were mixed with sunlight, with musk and white cotton. I passed by streets of peace lying entangled like cotton spools...”
― Anaïs Nin, Under a Glass Bell
6 likes
Like

Eleanor Catton
author of
The Lumin...