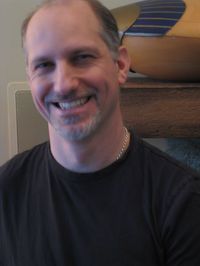 Born
in New York, The United States
Website
http://www.doncalame.com/
Genre
Young Adult
Member Since
August 2010
edit data
Don Calame the author of SWIM THE FLY, BEAT THE BAND, CALL THE SHOTS and DAN VERSUS NATURE. He is also a professional screenwriter whose film projects include EMPLOYEE OF THE MONTH and HOUNDED. Of his many prior occupations, he says his most satisfying was teaching elementary school for four years in Los Angeles, where he received the LAUSD District Intern Golden Apple Award and a Los Angeles Education Partnership Grant. He lives in British Columbia.

The Great British Bake Off Is Making Me Plump

​My wife and I go through phases where we will find a TV show we like and then binge watch the thing until we have watched every last episode. Normally, this does not pose any health problems. However, recently, we’ve started watching a program that has my doctor telling me I now have high cholesterol.

We can watch something like Fixer Upper and, while it may make me want to clean out the garage Read more of this blog post »
View more on Don Calame's website »
Like  •  0 comments  •  flag

“...The Things we do not want to speak abot are the very things we need to speak about most”
― Don Calame, Swim the Fly
10 likes
Like

“Oh, by the way," Coop announces as he weaves his DeathBot ship through a barrage of space debris on his laptop screen. "In case you didn't know. It's national 'That's What She Said' Day."
I give him a thumbs-up. "I like it."
We're camping out in Sean's backyard tonight. It's another one of our traditions. One night, every summer, we buy a ton of junk food and energy drinks and set up Sean's six-person tent in the far corner of his yard.
We've got an extension cord running from the garage so that we can rough it in style, with computers and a TV and DVD player. There's a citronella candle burning in the middle of the tent to ward off mosquitoes and to mask the thick stink of mildew. Everyone's brought sleeping bags and pillows, but we aren't planning on logging too many Zs.
Sean enters the tent carrying his Xbox. "I don't think there are enough sockets for all of these."
I waggle my eyebrows at Coop. "That's what she said."
Coop busts up.
Sean stands there, looking confused. "I don't get it."
"That's what she says," Coop says, sending him and me into hysterics.
Sean sighs and puts the Xbox down. "I can see this is going to be a long night."
"That's what she said," me and Coop howl in chorus.
"Are you guys done yet?"
Coop is practically in tears. "That's what she said."
"Okay. I'll just keep my mouth shut," Sean grumbles.
"That's what she said." I can barely talk I'm laughing so hard.
"Enough. No more. My cheeks hurt," Coop says, rubbing his face.
I point at him. "That's what she said."
And with that, the three of us fall over in fits.
"Oh, man, now look what you made me do."
Coop motions to his computer. "That was my last DeathBot ship."
"That's what she said," Sean blurts out, laughing at his nonsensical joke.
Coop and I stare at him, and then silmultaniously, we hit Sean in the face with our pillows.”
― Don Calame, Swim the Fly
tags: swim-the-fly, teenage-boys, that-s-what-she-said
9 likes
Like