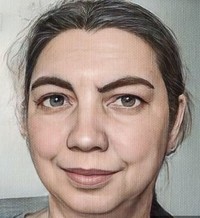 She writes regularly on her blogs – Wind in Her Mane (http://ncorres.wordpress.com) and the Zen of Living Smaller (http://zolsmaller.wordpress.com), as well as her official author's website at https://nataliacorres Natalia Corres has worked in technology for a few decades, built a pet sitting business from scratch, and now spends her time in creative pursuits - writing and painting and crafting. An active member of the California Writers Club - Writers of Kern (www.writersofkern.com) branch 2018/2019/2020, and Inland Empire Branch (https://iecwc.com/) 2021/2022; she lives with her husband - Bill; and their dog - Logan, in their sanctuary on the outskirts of suburbia where they are often visited by wild donkeys, crows, raccoons, and a possum.

She writes regularly on her blogs – Wind in Her Mane (http://ncorres.wordpress.com) and the Zen of Living Smaller (http://zolsmaller.wordpress.com), as well as her official author's website at https://nataliacorres.com .
...more

Spring is coming no matter what that Groundhog says

It has been an interesting start to 2023 – January brought loads of fun projects, some I declined and some I accepted. One is for my good friend Gaston’s second Star Trek original series animation, “The Fall of the Sparrow” which should be out later this year. I will be doing announcements and social media for the project. You might remember his last animation, “Star Trek – The Paradise Makers” in

More of Natalia's books…
Quotes by Natalia Corres  (?)
Quotes are added by the Goodreads community and are not verified by Goodreads. (Learn more)
“To be a poet is a condition, not a profession."
~ Robert Graves”
― Natalia Corres
tags: poet, poetry
0 likes
Like

“One must live as if it would be forever, and as if one might die each moment. Always both at once.”
― Mary Renault, The Persian Boy
tags: alexander-the-great, mary-renault, the-persian-boy
2259 likes
Like

“A cult is a group of people who share an obsessive devotion to a person or idea. The cults described in this book use violent tactics to recruit, indoctrinate, and keep members. Ritual abuse is defined as the emotionally, physically, and sexually abusive acts performed by violent cults. Most violent cults do not openly express their beliefs and practices, and they tend to live separately in noncommunal environments to avoid detection.

Some victims of ritual abuse are children abused outside the home by nonfamily members, in public settings such as day care. Other victims are children and teenagers who are forced by their parents to witness and participate in violent rituals. Adult ritual abuse victims often include these grown children who were forced from childhood to be a member of the group. Other adult and teenage victims are people who unknowingly joined social groups or organizations that slowly manipulated and blackmailed them into becoming permanent members of the group. All cases of ritual abuse, no matter what the age of the victim, involve intense physical and emotional trauma.

Violent cults may sacrifice humans and animals as part of religious rituals.
They use torture to silence victims and other unwilling participants. Ritual abuse victims say they are degraded and humiliated and are often forced to torture, kill, and sexually violate other helpless victims. The purpose of the ritual abuse is usually indoctrination. The cults intend to destroy these victims' free will by undermining their sense of safety in the world and by forcing them to hurt others.

In the last ten years, a number of people have been convicted on sexual abuse charges in cases where the abused children had reported elements of ritual child abuse. These children described being raped by groups of adults who wore costumes or masks and said they were forced to witness religious-type rituals in which animals and humans were tortured or killed. In one case, the defense introduced in court photographs of the children being abused by the defendants[.1] In another case, the police found tunnels etched with crosses and pentacles along with stone altars and candles in a cemetery where abuse had been reported. The defendants in this case pleaded guilty to charges of incest, cruelty, and indecent assault.[2] Ritual abuse allegations have been made in England, the United States, and Canada.[3]

“Betrayal is too kind a word to describe a situation in which a father says he loves his daughter but claims he must teach her about the horrors of the world in order to make her a stronger person; a situation in which he watches or participates in rituals that make her feel like she is going to die. She experiences pain that is so intense that she cannot think; her head spins so fast she can't remember who she is or how she got there.

All she knows is pain. All she feels is desperation. She tries to cry out for help, but soon learns that no one will listen. No matter how loud she cries, she can't stop or change what is happening. No matter what she does, the pain will not stop. Her father orders her to be tortured and tells her it is for her own good. He tells her that she needs the discipline, or that she has asked for it by her misbehavior. Betrayal is too simple a word to describe the overwhelming pain, the overwhelming loneliness and isolation this child experiences.

As if the abuse during the rituals were not enough, this child experiences similar abuse at home on a daily basis. When she tries to talk about her pain, she is told that she must be crazy. "Nothing bad has happened to you;' her family tells her Each day she begins to feel more and more like she doesn't know what is real. She stops trusting her own feelings because no one else acknowledges them or hears her agony. Soon the pain becomes too great. She learns not to feel at all. This strong, lonely, desperate child learns to give up the senses that make all people feel alive. She begins to feel dead.
She wishes she were dead. For her there is no way out. She soon learns there is no hope.

As she grows older she gets stronger. She learns to do what she is told with the utmost compliance. She forgets everything she has ever wanted. The pain still lurks, but it's easier to pretend it's not there than to acknowledge the horrors she has buried in the deepest parts of her mind. Her relationships are overwhelmed by the power of her emotions. She reaches out for help, but never seems to find what she is looking for The pain gets worse. The loneliness sets in. When the feelings return, she is overcome with panic, pain, and desperation.

She is convinced she is going to die. Yet, when she looks around her she sees nothing that should make her feel so bad. Deep inside she knows something is very, very wrong, but she doesn't remember anything. She thinks, "Maybe I am crazy.”
― Margaret Smith, Ritual Abuse: What It Is, Why It Happens, and How to Help
tags: abuse, betrayal, child-abuse, child-sexual-abuse, control, crazy, denial, desparation, horror, hurt, insane, loneliness, manipulation, pain, pretend, ritual-abuse, rituals
206 likes
Like

“To be a poet is a condition, not a profession."
~ Robert Graves”
― Natalia Corres
tags: poet, poetry
0 likes
Like

Any personal or professional venture refered to me by Natalia is worth checking out - of course that will apply to books as well.