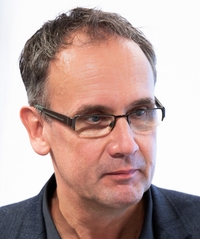 “It was already dark when Rath reached Küstriner Platz, where even the street-lighting was dimmer than in the city or in Charlottenburg. It almost seemed as if the streetlights were ashamed of what they were obliged to illuminate.”
― Volker Kutscher, Babylon Berlin
2 likes
Like

“The bullet had made Wessel a martyr for the Nazi movement, but he was an unlikely saint: a young priest’s son who had jolted the SA in Friedrichshain into action, only to fall in love with a prostitute and start shamefully neglecting his SA. Goebbels didn’t care. For Berlin’s top Nazi, the Sturmführer made the perfect martyr. Nevertheless, it was fortunate that Wessel had finally succumbed to his injuries, otherwise the model Nazi might yet have resigned from the NSDAP. In the last few months, he seemed to have lost all interest in politics.”
― Volker Kutscher, The Silent Death: A Gereon Rath Mystery
1 likes
Like

Is this you? Let us know. If not, help out and invite Volker to Goodreads.