Discover new books on Goodreads
See if your friends have read any of Sarah A. Hoyt's books

Sarah A. Hoyt isn't a Goodreads Author (yet), but she does have a blog, so here are some recent posts imported from her feed. 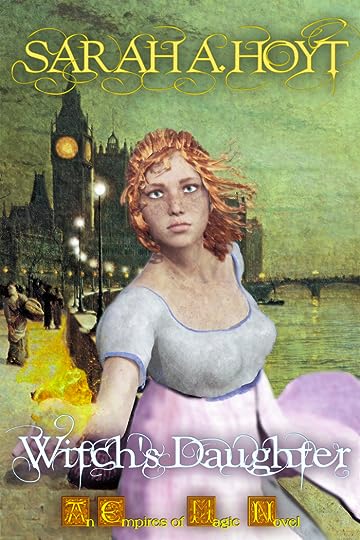 *For the previous chapters, please go here. These are posted first draft, as the brain dictates to the fingers which are remarkably stupid. Also there will be inconsistencies because until September or so, the timing on these is wonky, and I’ll forget stuff between posts. Eventually it will be cleaned up and fixed just before page is made secret/taken down and the book is published. At that ti

Series by Sarah A. Hoyt

Darkship (5 books)
by
Sarah A. Hoyt

Shifters (3 books)
by
Sarah A. Hoyt

Quotes by Sarah A. Hoyt

“Thena . . . I fell in love with you as you are. Fractured, maybe. Lost, perhaps. But I'm no prize either.”
― Sarah A. Hoyt, DarkShip Thieves
tags: darkship, kit-klaavil, thena, thieves
9 likes
Like

I tried to sigh and would have managed it, had he left me enough air space. If he intended on kissing me like this a lot, I was going to need a nose-mask and oxygen tanks in the future.
Yes, I said reluctantly, I think I must.
It was perfectly clear to me that the poor man had become disturbed in his reason, and in those conditions it would be cruel and unfair to send him to space alone, much less when space had become so dangerous. I must marry him, just to make sure he stayed safe. It was the least I could do, since I was fairly sure I'd started him on this road by trying to garrotte him and reducing his supply of oxygen to the
brain.
Yes, yes, you must, he said. It gets very boring in the Cathouse, without anyone to kick me.
Poor man. Madder than a broomer hopped up on oblivium.”
― Sarah A. Hoyt, DarkShip Thieves
4 likes
Like

See all Sarah A. Hoyt's quotes »

SEPTEMBER FANTASY: The top two of this poll will move on to the run-off poll for September Fantasy Book of the Month!