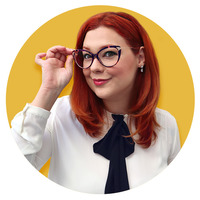 Devouring comic books, superhero movies and reinventing recipes are just a few of my favorite things. Oh, and all things nerdy. And cats!

You can read about my journey From Writing To Publishing on my Blog, where I documented each stage in extensive articles.

The power of a self-published author resides in the #WritingCommunity, in the help and support we offer each other to make our work known and our voices heard. If this sounds cool, don’t hesitate to drop me an email and grow that literary buddy circle.

Riley Quinn is a Canadian author and musician. He grew up in Western Canada, dividing his time between the Prairies, the Rocky Mountains, and the shores of the North West Coast. Writing has been a lifelong passion for him, and he has laptops, note-pads, and...

More of Esther's books…
Quotes by Esther Rabbit  (?)
Quotes are added by the Goodreads community and are not verified by Goodreads. (Learn more)
“If life had been a calligraphy contest she’d be the right-handed dummy attending her first lesson with the left hand.

She sympathized with the clumsy because she’d always felt like one, it was her own built-in teacher feature. Not understanding where she fit in came with a lot of drama and a lot of days in the rain with no umbrella.”
― Esther Rabbit, Lost in Amber

“When you’re in your twenties and you haven’t fully realized what you look for in a partner, the single market has about everything you can imagine and more. And you’re like a blank canvas—everyone’s like a blank canvas—as you discover how to paint a relationship together.

Later in life, when you’ve experienced love and heartbreak and you find yourself single again and returning to the spouseless market, you kind of figure out that what’s left for you…is not a blank canvas for you to write your story on anymore. Every bachelor comes with a previous story, with drama and emotional baggage from their past relationships.

And you—you—have to deal with it all, measure the puzzle pieces and see if somehow they might fit within the gaps and cracks left by your own experiences.”
― Esther Rabbit, Lost in Amber

“If life had been a calligraphy contest she’d be the right-handed dummy attending her first lesson with the left hand.

She sympathized with the clumsy because she’d always felt like one, it was her own built-in teacher feature. Not understanding where she fit in came with a lot of drama and a lot of days in the rain with no umbrella.”
― Esther Rabbit, Lost in Amber

“The week wasn’t even over and on top of Sam and Emma getting dumped slash divorced, Zoey remembered Ben the janitor freshly divorcing his spouse and Christopher Grave breaking it off for the billionth time with none other than Anthony Bush, her first adult crush. Those two were probably
going to go on and off like the Grand Slam anyway.

The world was soon coming to a broken-hearted zombie apocalypse with the
not-so-better halves roaming the Earth in search of the one meant to put an end to the misery, sales of self-help books going high, therapists’ agendas fully booked, and chick flicks gone out of the shelves of video rental stores—if there were any left post Netflix.”
― Esther Rabbit, Lost in Amber
tags: alien-romance, breakup, girl-power, heartbreak, paranormal-romance, paranormal-romance-novels, paranormal-romance-series, relationships, women-s-fiction, women-s-inspirational
0 likes
Like

“Nose wipe?” Zoey pulled out a Kleenex. “Is it just me or does this brand sound exactly like what it’s for…clean your tears after your ex…Kleenex?”
― Esther Rabbit, Lost in Amber
tags: breakup, crying, kleenex, paranormal-romance, paranormal-romance-series
0 likes
Like

But in the meantime, this would be a distraction. Purgatory. With drinks and meeting new people, more time to focus on
lesson planning and craftwork, art galleries, miniature museums. Anything to keep the thoughts away from drowning the itsy bit of sanity left. She’d even settle for a state of
temporary trance.”
― Esther Rabbit, Lost in Amber
tags: breakup, heartbreak, paranormal-romance, romantic-comedy
0 likes
Like