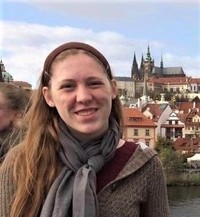 “The temptation for farandola or for man or for star is to stay an immature pleasure-seeker. When we seek our own pleasure as the ultimate good we place ourselves as the center of the universe. A fara or a man or a star has his place in the universe, but nothing created is the center.”
― Madeleine L'Engle, A Wind in the Door
8 likes

“We tend to think things are new because we just discovered them.”
― Madeleine L'Engle, A Wind in the Door
36 likes

“Meg’s eyes were too bright. “I wish human beings couldn’t have feelings. I am having feelings. They hurt.”
― Madeleine L'Engle, A Wind in the Door
tags: feelings, hurt
13 likes

“Hey Meg! Communication implies sound. Communion doesn't.' He sent her a brief image of walking silently through the woods, the two of them alone together., their feet almost noiseless on the rusty carpet of pine needles. They walked without speaking, without touching, and yet they were as close as it is possible for two human beings to be. They climbed up through the woods, coming out into the brilliant sunlight at the top of the hill. A few sumac trees showed their rusty candles. Mountain laurel, shiny, so dark a green the leaves seemed black in the fierceness of sunlight, pressed toward the woods. Meg and Calvin had stretched out in the thick, late-summer grass, lying on their backs, gazing up into the shimmering blue of sky, a vault interrupted only by a few small clouds.

And she had been as happy, she remembered, as it is possible to be, and as close to Calvin as she had ever been to anybody in her life, even Charles Wallace, so close that their separate bodies, daisies and buttercups joining rather than dividing them, seemed a single enjoyment of summer and sun and each other.

That was surely the purest kind of thing.

Mr. Jenkins had never had that kind of communion with another human being, a communion so rich and full that silence speaks more powerfully than words.”
― Madeleine L'Engle, A Wind in the Door

“Pride is not the opposite of shame, but it's source. True humility is the only antidote to shame.”
― General Iroh
tags: humility, inspirational, pride, shame
72 likes

Margaret Peterson Haddix
author of
Among the...

Jill Williamson
author of
By Darkne...

Shannon Messenger
author of
Keeper of...