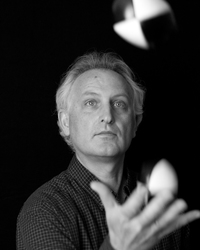 The Wit’s End World* Tour is winding down, but here’s a little visual retrospective of the places I’ve been and the people I’ve met. My thanks to all the booksellers, bookshops, festivals, and organizers of these events—and especially to everyone who turned out to talk about wit.

(* By ‘World’, of course I mean the United States of America…)

“You only really discover the strength of your spine when your back is against the wall.”
― James Geary
8 likes
Like

“For life is short and the art of writing books is very, very long.”
― James Geary
5 likes
Like

“Pattern recognition is so basic that the brain's pattern detection modules and its reward circuitry became inextricably linked. Whenever we successfully detect a pattern-or think we detect a pattern-the neurotransmitters responsible for sensations of pleasure squirt through our brains. If a pattern has repeated often enough and successfully enough in the past, the neurotransmitter release occurs in response to the mere presence of suggestive cues, long before the expected outcome of that pattern actually occurs. Like the study participants who reported seeing regular sequences in random stimuli, we will use alomst any pretext to get our pattern recognition kicks.

Pattern recognition is the most primitive form of analogical reasoning, part of the neural circuitry for metaphor. Monkeys, rodents, and birds recognize patterns, too. What distinguishes humans from other species, though, is that we have elevated pattern recognition to an art. "To understand," the philosopher Isaiah Berlin observed, "is to perceive patterns."

his brain created a pattern connecting umbrellas to banks, a pattern retraced every time someone else reads this sentence. Frost believed passionately that an understanding of metaphor was essential not just to survival in university literature courses but also to survival in daily life.”
― James Geary, I is an Other: The Secret Life of Metaphor and How it Shapes the Way We See the World

Georges Perec
author of
Life: A U...