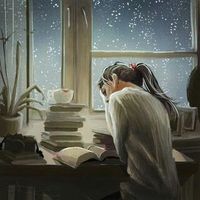 A little late in posting my tbr for April but ah well, I am still posting! I failed utterly at my last reading months tbr tho I DID read around twenty books, wrap up to come soon. This month I have a single buddy read and a few arcs, library books, and I’m actually plowing […]
View more on Andria Potter's website »
Like  •  0 comments  •  flag

“We dream in our waking moments, and walk in our sleep.”
― Nathaniel Hawthorne, The Scarlet Letter
2505 likes

“What was that?" Belgarath asked, coming back around the corner.
"Brill," Silk replied blandly, pulling his Murgo robe back on.
"Again?" Belgarath demanded with exasperation. "What was he doing this time?"
"Trying to fly, last time I saw him." Silk smirked.
The old man looked puzzled.
"He wasn't doing it very well," Silk added.
Belgarath shrugged. "Maybe it'll come to him in time."
"He doesn't really have all that much time." Silk glanced out over the edge.
"From far below - terribly far below - there came a faint, muffled crash; then, after several seconds, another. "Does bouncing count?" Silk asked.
Belgarath made a wry face. "Not really."
"Then I'd say he didn't learn in time." Silk said blithely.”
― David Eddings, Magician's Gambit

“I am a tiny seashell
that has secretly drifted ashore
and carries the sound of the ocean
surging through its body.”
― Edward Hirsch

Thanks for the friendvite, Ria. I'm looking forward perusing your read-list and getting some recommendations.
Have an amazing weekend! 🌷

Hi Ria, thank you for the friend request! Looking forward to chatting books with you :)

Thank you for the sweet invite Ria! Look forward to sharing books with you!