,
Discover new books on Goodreads
See if your friends have read any of Ben Goldfarb's books 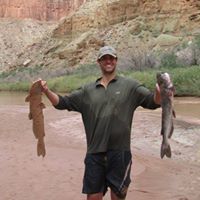 More of Ben's books…
Quotes by Ben Goldfarb  (?)
Quotes are added by the Goodreads community and are not verified by Goodreads. (Learn more)
“Beavers, the animal that doubles as an ecosystem, are ecological and hydrological Swiss Army knives, capable, in the right circumstances, of tackling just about any landscape-scale problem you might confront. Trying to mitigate floods or improve water quality? There’s a beaver for that. Hoping to capture more water for agriculture in the face of climate change? Add a beaver. Concerned about sedimentation, salmon populations, wildfire? Take two families of beaver and check back in a year. If that all sounds hyperbolic to you, well, I’m going to spend this book trying to change your mind.”
― Ben Goldfarb, Eager: The Surprising, Secret Life of Beavers and Why They Matter
7 likes
Like

“That story, of course, isn’t unique to California, or to beavers. Europeans began despoiling North American ecosystems the moment they set boots on the stony shore of the New World. You’re probably familiar with most of the colonists’ original environmental sins: They wielded an ax against every tree, lowered a net to catch every fish, turned livestock onto every pasture, churned the prairie to dust. In California’s Sierra Nevada, nineteenth-century gold miners displaced so much sediment that the sludge could have filled the Panama Canal eight times.14 We are not accustomed to discussing the fur trade in the same breath as those earth-changing industries, but perhaps we should. The disappearance of beavers dried up wetlands and meadows, hastened erosion, altered the course of countless streams, and imperiled water-loving fish, fowl, and amphibians—an aquatic Dust Bowl. Centuries before the Glen Canyon Dam plugged up the Colorado and the Cuyahoga burst into flame, fur trappers were razing stream ecosystems. “[Beavers’] systematic and widespread removal,” wrote Sharon Brown and Suzanne Fouty in 2011, “represents the first large-scale Euro-American alteration of watersheds.”
― Ben Goldfarb, Eager: The Surprising, Secret Life of Beavers and Why They Matter
0 likes
Like

“Twenty million years ago Nebraska resembled nothing so much as the Serengeti, a river-webbed grassland upon which foraged a spectacular mammalian bestiary: tiny camels and giant wolverines, two-horned rhinos and pig-like oreodonts, muscular beardogs and lithe horses.”
― Ben Goldfarb, Eager: The Surprising, Secret Life of Beavers and Why They Matter
0 likes
Like