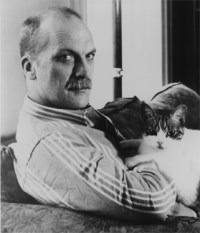 Born
in Medfield, Massachusetts, The United States
December 11, 1945
Died
April 28, 1994
Website
http://www.duskpeterson.com/preston/index.htm
Genre
Gay & Lesbian, Literature & Fiction, Biographies & Memoirs
edit data
John Preston wrote and edited gay erotica, fiction, and nonfiction.
He grew up in Medfield, Massachusetts, later living in a number of major American cities before settling in Portland, Maine in 1979. A writer of fiction and nonfiction, dealing mostly with issues in gay life, he was a pioneer in the early gay rights movement in Minneapolis. He helped found one of the earliest gay community centers in the United States, edited two newsletters devoted to sexual health, and served as editor of The Advocate in 1975.

Preston served as a journalist and essayist throughout his life. He wrote news articles for Drummer and other gay magazines, produced a syndicated column on gay life in Maine, and penned a column for Lambda Book Report called "Preston on Publishing." His nonfiction anthologies, which collected essays by himself and others on everyday aspects of gay and lesbian life, won him the Lambda Literary Award and the American Library Association's Stonewall Book Award. He was especially noted for his writings on New England.

Although primarily known as a gay fiction writer, Preston was also hired by a local newspaper, The Portland Chronicle, to write news articles and features about his adopted hometown of Portland. He wrote a long feature about the local monopoly newspaper, the Portland Press Herald, as well as many food articles movie reviews and other writing.

In addition, Preston wrote men's adventure novels under the pseudonyms of Mike McCray, Preston MacAdam, and Jack Hilt (pen names that he shared with other authors). Taking what he had learned from authoring those books, he wrote the "Alex Kane" adventure novels about gay characters. These books, which included "Sweet Dreams," "Golden Years," and "Deadly Lies," combined action-story plots with an exploration of issues such as the problems facing gay youth.

Preston was among the first writers to popularize the genre of safe sex stories, editing a safe sex anthology entitled Hot Living in 1985. He helped to found the AIDS Project of Southern Maine. In the late 1980s, he discovered that he himself was HIV positive.

Some of his last essays, found in his nonfiction anthologies and in his posthumous collection Winter's Light, describe his struggle to come emotionally to terms with a disease that had already killed many of his friends and fellow writers.

He died of AIDS complications on April 28, 1994, aged 48, at his home in Portland. His papers are held in the Preston Archive at Brown University.

The Mission of Alex Kane (6 books)
by
John Preston

“The way to get better pornography is to give pornographers better sex.”
― John Preston, My Life as a Pornographer & Other Indecent Acts
tags: pornography
11 likes
Like

“Where we come from is important to who we are….Do we sense that we fit? Do we feel welcome? Do we experience ourselves as valued members of the community? How are we perceived by our neighbors and peers? These are among the most fundamental questions we have to answer.

Most men begin with the promise that we are, in fact, welcome. The boy child is, in almost all our known contexts, the heir. He has a right to assume that he will acquire whatever is possible in his world. If his background includes being the member of a disenfranchised group because of race, religion, ethnic background, or class status, he still has the expectation of achieving the most that background will give him.

The gay man, since he is primarily a man, begins with those assumptions. It isn’t until he comes of age and understands his sexual identity and the way it separates him from his birth community that a gay man achieves a perception of being a member of this particular minority….

One of the first questions that a gay man has to answer revolves around the basic issue: Where do I belong? Having grown up as a privileged member of his community, he will now have to ask himself if he can stay there. For years, gay men thought they only had two choices: They could either sublimate their erotic identities and remain in their hometown, or they could move to large centers of population and lose themselves in anonymity. There was no way for a gay man to have a hometown and still be honest with himself. He had to hide his social and sexual proclivities, or else he had to give up communal life in pursuit of them.”
― John Preston, Hometowns
0 likes
Like

“everything about him was brown - dark brown. His skin was mahogany-coloured. So were his clothes: a cotton tie, a tweed jacket with the top button fastened and what appeared to be a cardigan beneath. He was like a kipper in human form. It seemed absurd that his name should be Brown too.”
― John Preston, The Dig, Large Print
tags: characterisation, east-anglia, suffolk, sutton-hoo
0 likes
Like