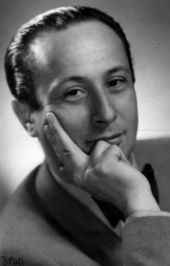 Born
in Sosnowiec, Poland
December 05, 1911
Died
July 06, 2000
Website
http://www.szpilman.net/
Genre
Biographies & Memoirs
edit data
Polish pianist, composer and memoirist.
Szpilman is widely known as the protagonist of the Roman Polański film The Pianist , which is based on his autobiographical book recounting how he survived the Holocaust. In November 1998 Władysław Szpilman was honoured by the president of Poland with a Kommandor Order with a Star of Polonia Restituta.

“And now I was lonelier, I supposed, than anyone else in the world. Even Defoe's creation, Robinson Crusoe, the prototype of the ideal solitary, could hope to meet another human being. Crusoe cheered himself by thinking that such a thing could happen any day, and it kept him going. But if any of the people now around me came near I would need to run for it and hide in mortal terror. I had to be alone, entirely alone, if I wanted to live.”
― Władysław Szpilman, The Pianist: The Extraordinary Story of One Man's Survival in Warsaw, 1939–45
tags: holocaust
69 likes
Like

“The life of a human being, let alone his personal freedom, is a matter of no importance. But the love of freedom is native to every human being and every nation, and cannot be suppressed in the long term. History teaches us that tyranny has never endured. And now we have blood-guilt on our conscience for the dreadful injustice of murdering the Jewish inhabitants.”
― Władysław Szpilman, The Pianist
19 likes
Like

“That evening it was announced that curfew would be postponed until midnight, so that the families of those ‘sent for labour’ would have time to bring them blankets, a change of underwear and food for the journey. This ‘magnanimity’ on the part of the Germans was truly touching, and the Jewish police made much of it in an effort to win our confidence. Not until much later did I learn that the thousand men rounded up in the ghetto had been taken straight to the camp at Treblinka, so that the Germans could test the efficiency of the newly built gas chambers and crematorium furnaces.”
― Władysław Szpilman, The Pianist
16 likes
Like

Which book would you like to read for our June 2015 New School group read?