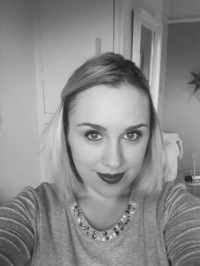 Melissa hasn't connected with their friends on Goodreads, yet.

Melissa Woods is the author of ‘Alive?’, a young adult zombie adventure story, set for release on October 30th 2018.

Twitter:
@MelissaJaneWH Writer, primary school teacher, and occasionally someone who goes outside.

Melissa Woods is the author of ‘Alive?’, a young adult zombie adventure story, set for release on October 30th 2018.

“it sank its teeth into Luke’s cheek, ripping at the skin and tearing off great chunks. Joe pushed Violet behind him, and ran for the man while Tony froze in terror. Joe grabbed the biter from behind, pulling him off Luke. Luke stumbled toward Violet, spraying her with blood as he fell. She tried to stop him landing so hard, holding onto him as he went down. His blood soaked her shirt, and she clamped her hand over her nose and mouth, using the other to try to stop the bleeding. Oh no. Just don’t breathe, don’t breathe. “Help me,” she called to Tony, who still didn’t move. Joe was trying to hold the dead man back. “Help me stop the bleeding,” she ordered. Tony opened and closed his mouth like a fish, still not moving. She heard Joe cry out in triumph as he stabbed the biter through its eye, letting it fall to the ground. Then he appeared at Violet’s side. “Go into the bathroom,” he ordered. She stumbled to her feet, still not daring to breathe, and ran to the bathroom, slamming the door behind her. Things were spinning, but she was still in control. For now.”
― Melissa Woods, Alive?
-1 likes
Like