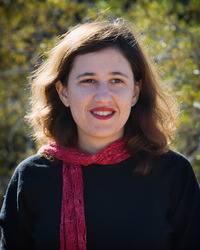 Born
October 01, 1973
Website
http://www.liasilver.com/category/rachel-manija...
Genre
Fantasy, Young Adult, Science Fiction & Fantasy
Member Since
July 2012
edit data
Rachel Manija Brown is the author of all sorts of stories in all sorts of genres. Most of her works are listed below, but she has also written television, plays, video games, and a comic strip meant to be silk-screened on to a scarf. In her other identity, she is a trauma/PTSD therapist.

She writes urban fantasy for adults under the pen names of Lia Silver and Rebecca Tregaron.

If you'd like to get a review copy of one of her books, please message her.

Rachel Manija Brown is the author of all sorts of stories in all sorts of genres. Most of her works are listed below, but she has also written television, plays, video games, and a comic strip meant to be silk-screened on to a scarf. In her other identity, she is a trauma/PTSD therapist.

She writes urban fantasy for adults under the pen names of Lia Silver and Rebecca Tregaron.

If you'd like to get a review copy of one of her books, please message her.

Seems like a normal goofy kid question, right? But like many goofy kid questions, it's actually getting at a very complex issue. And the kid who asks it, twelve-year-old Matthew, has a lot more questions along similar lines: "Why does a week have seven days?" "Where is the Earth?" "Why are there men and women?"

But Matthew isn't just a bright, curious kid. He says it's not him th Read more of this blog post »
View more on Rachel Manija Brown's website »
Like  •  0 comments  •  flag

“Everyone's got their own way of loving. There's no such thing as 'supposed to”
― Rachel Manija Brown
tags: lgbt, love
3 likes
Like

“Real magic can never be made by offering someone else's liver. You must tear out your own, and not expect to get it back.”
― Peter S. Beagle, The Last Unicorn
tags: inspirational, magic, reminding, sacrifice
764 likes
Like

“Some prices are just too high, no matter how much you may want the prize. The one thing you can't trade for your heart's desire is your heart.”
― Lois McMaster Bujold, Memory
326 likes
Like

“And though I came to forget or regret all I have ever done, yet I would remember that once I saw the dragons aloft on the wind at sunset above the western isles; and I would be content.”
― Ursula K. Le Guin, The Farthest Shore
tags: content, dragons, reminiscence, sunset
123 likes
Like

“We have nothing but our freedom. We have nothing to give you but your own freedom. We have no law but the single principle of mutual aid between individuals. We have no government but the single principle of free association. We have no states, no nations, no presidents, no premiers, no chiefs, no generals, no bosses, no bankers, no landlords, no wages, no charity, no police, no soldiers, no wars. Nor do we have much else. We are sharers, not owners. We are not prosperous. None of us is rich. None of us is powerful. If it is Anarres you want, if it is the future you seek, then I tell you that you must come to it with empty hands. You must come to it alone, and naked, as the child comes into the world, into his future, without any past, without any property, wholly dependent on other people for his life. You cannot take what you have not given, and you must give yourself. You cannot buy the Revolution. You cannot make the Revolution. You can only be the Revolution. It is in your spirit, or it is nowhere.”
― Ursula K. Le Guin, The Dispossessed
tags: anarchy
128 likes
Like

“To all the readers who do not know me personally, who were kind enough to take the trouble to read my small effort, I know no greater happiness than that it may have cheered you, even a little. Surely we will meet some day, and until that day, I pray you will live happily.”
― Banana Yoshimoto, Kitchen
tags: dedication
0 likes
Like

I don't know why stupid GoodReads isn't letting me rec stuff, but this is great: http://www.goodreads.com/book/show/21... Extremely well-written.

I have the OCD thing going so once I start reading a series I typically power through as much of it is available/I really like. Then I use it up too fast and get sulky.

Maybe I should read that next. I'm reading more Courtney Milan now.

Rachel wrote: "Yes, I liked it. I have the sequels but haven't had a chance to read them yet."

The first book wobbled here and there (esp toward the end) and the voice was a little stuff, but the first half was pretty good and then in the second half it went into fourth gear. Sadly enough the sequel started off with an overly long confusing spoiler-ridden cast list. Also maps ALWAYS look shitty on the Kindle. sigh. But we're starting off with the Great Fire of London, boo-yah!

Yes, I liked it. I have the sequels but haven't had a chance to read them yet.

Did you read Midnight Never Come? If so, what did you think of it? I'm about halfway through it and the plot really kicked in - I've been enjoying it a lot.

No, I've never read it, but keep meaning to.

Heigh-ho, heigh-ho, off to an eight hour trauma workshop I go.

I mean, just listen to this guy; "One of the reasons I love Murder is that the victims are, as a general rule, dead....I don't make a habit of sharing this, in case people take me for a sicko or -- worse -- a wimp, but give me a dead child, any day, over a child sobbing his heart out while you make him tell you what the bad man did next. Dead victims don't show up crying outside HQ to beg for answers, you never have to nudge them into reliving every hideous moment, and you never have to worry about what it'll do to their lives if you fuck up. They stay put in the morgue, light-years beyond anything I can do right or wrong, and leave me free to focus on the people who sent them there." Isn't that GREAT? He's all I AM SO TOUGH, YES I AM, and there's those little giveaways ("if you fuck up," "worse -- a wimp") that make it clear just how much being tough means to him and how hard he clings to it. It's great.

(Despite him being this total tough guy, tho, he's not one of those macho asshole types - he's almost painfully by the book, highest solve rate in the squad, every box ticked &c &c. She's really good at portraying his tough laser-focused work persona, but showing you what's under that, and in a 1P narrative! Admirable.)

Rachel wrote: "I have been liking the quotes you've been posting."

The guy is one of those really tightly-wound types who has to wind up that tight to keep from flying apart, and there are women in the book too - good real characters. It's in first person but there are enough people interacting with him and calling him on his BS that the narrative doesn't feel totally self-justifying, like it did in the FIRST (ugh) book, and the black humour repartee between him and the crime scene tech types is excellent. There's also a subplot about him breaking in a rookie detective who's been on the job two weeks that's really good. (It's also set in Ireland - all her books are - and she's good at conveying different local speech patterns without resorting to phonetic dialect, too.)

I have been liking the quotes you've been posting.

The GR recommend-a-book autocomplete field is not working for me (argh) but I think you might really like Tana French's latest. Broken Harbor I know you (JUSTIFIABLY) really hated her first one, which sucked, but this one's excellent so far - it's her fourth. (I forget whether or not you looked at the second novel, about Cassie - the voice in that was good too, but the plot was terribly flimsy, and this has a lot more of all the actual investigatory details I think we both like a lot).

Me too! I am madly studying.