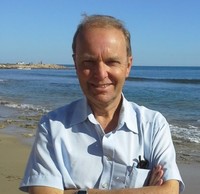 Robert was born in London (England), but was brought-up in Lima (Peru), studying at Markham College. He returned to England to go to Aston University in Birmingham, and later City University of London, where he earned a Master’s degree.

Aged eleven, he won a short story competition. However, his career was not in writing but in banking and finance in England, Japan and Spain, university lecturer in Spain and Saudi Arabia, head of an English department at a university in the Middle East, supervising over 100 teachers, and owner of an educational business in Spain, leading a team of 60 people. Unfortunately, he didn’t have much time for (Biografía en español abajo)

Robert was born in London (England), but was brought-up in Lima (Peru), studying at Markham College. He returned to England to go to Aston University in Birmingham, and later City University of London, where he earned a Master’s degree.

Aged eleven, he won a short story competition. However, his career was not in writing but in banking and finance in England, Japan and Spain, university lecturer in Spain and Saudi Arabia, head of an English department at a university in the Middle East, supervising over 100 teachers, and owner of an educational business in Spain, leading a team of 60 people. Unfortunately, he didn’t have much time for writing.

Nevertheless, his true vocation is writing. An Oxford University creative writing programme was instrumental in developing his career as a novelist.

His study of Peruvian and world history led to his historical thriller, The Titans of the Pacific, about one of the most dramatic periods in history. The sequel novel, Blessed Assassination, ends with the assassination of President Sánchez-Cerro, which took place across the street from where Robert lived in Lima.

His novels are based on exciting historical events in the countries where he has lived in Latin America, Europe, the Far East and the Middle East.

He is divorced, but has two marvellous daughters.

Robert is a member of the Historical Novel Society.

Talking to the Editor Behind Back-to-Back Booker Prizes

Douglas Stuart’s Shuggie Bain was announced this year’s Booker Prize winner. It’s no small feat for any writer, but what makes this win so spectacular is the fact that Shuggie Bain is a debut novel. (It’s only the fifth debut novel to win in the Booker’s 51-year-old history.) During his brief speech at the virtual award ceremony, Douglas Stuart thanked his editor for being Read more of this blog post »
Like  •  0 comments  •  flag

“Democracy is the worst form of government, except for all the others.”
― Winston S. Churchill
tags: criticism, democracy, humour, politics
489 likes

“The Earth should not be cut up into hundreds of different sections, each inhabited by a self-defined segment of humanity that considers its own welfare and its own "national security" to be paramount above all other consideration.

I am all for cultural diversity and would be willing to see each recognizable group value its cultural heritage. I am a New York patriot, for instance, and if I lived in Los Angeles, I would love to get together with other New York expatriates and sing "Give My Regards to Broadway."

This sort of thing, however, should remain cultural and benign. I'm against it if it means that each group despises others and lusts to wipe them out. I'm against arming each little self-defined group with weapons with which to enforce its own prides and prejudices.

The Earth faces environmental problems right now that threaten the imminent destruction of civilization and the end of the planet as a livable world. Humanity cannot afford to waste its financial and emotional resources on endless, meaningless quarrels between each group and all others. there must be a sense of globalism in which the world unites to solve the real problems that face all groups alike.

Can that be done? The question is equivalent to: Can humanity survive?

“Everyone has the right to freedom of opinion and expression; this right includes freedom to hold opinions without interference and to seek, receive and impart information and ideas through any media and regardless of frontiers.”
― United Nations, Universal Declaration of Human Rights
tags: borders, censorship, civil-rights, communication, encroachment, freedom-of-opinion, freedom-of-speech, freedom-of-thought, frontiers, government, human-rights, information, international-community, liberty, surveillance
224 likes

“The rights of every man are diminished when the rights of one man are threatened.”
― John F. Kennedy
tags: human-rights, inspirational, politics
1072 likes

Robert Gammon
author of
The Titan...

Hi Doug,
Great to be in contact with you.
Congratulations on what seem very varied and interesting novels you've written.
Your website is also very attractive. I like your videos promoting each of your novels - very creative. Can I ask who produced them? I could do with an attractive video for my recently published historical novel.
Best wishes,
Robert

Hi Dave,
It's great to be in contact with you. I can understand that you like things hispanic as I see you live in southern Spain part of the year (I'm based in Alicante province). I'm planning a historical novel set in the periof from the Spanish Civil War until the end of the Franco regime.
My email address is: robert.gammon_novelist@yahoo.com
Best regards,
Robert

Hi Robert. Thanks for making contact and good luck with the writing. I don't spend much time on Goodreads these days but if you need to chat my e-mail address is: davemccall@davidebsworth.org. Good luck with the writing though and I'll add "Titans of the Pacific" to my stupidly large TBR pile. After all, what's not to like? 1930s. Hispanic background. Thriller. Just my thing! Best regards. Dave

Robert, I just accepted your friend request. I am looking forward to know you better. Mat I suggest that you visit my website, and while there go ahead and click the link to subscribe (for free) to my online magazine. You will find it informative and enjoyable, and you could also be featured in it and well as contribute to it. Here's my link: www.dougboren.com