Discover new books on Goodreads
See if your friends have read any of K.P. Kulski's books 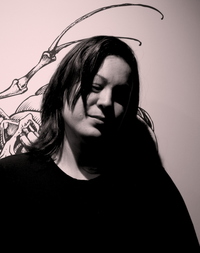 “Girls have poisoned themselves in the pursuit of beauty, drowned in the need for perfection. Just to obtain some worth, because even a little worth is everything. It happened and it will happen again and again.”
― K.P. Kulski, Fairest Flesh
tags: beauty, body-image, feminism
1 likes
Like

“Lift the breasts high, but not so high that they tower over the men. They do not like it if a woman is taller than them. So shrink.
Be young. Never ever grow old.
Don't live, don't breed without permission, but always give pleasure.”
― K.P. Kulski, Fairest Flesh

“He thinks questions are power but it only reveals that he is lacking, seeking and lost, poking aimlessly like a key in the dark, prodding for the relief of a lock to release. They pursue and in the end, it will be flames.”
― K.P. Kulski, Fairest Flesh
tags: darkness, witches
0 likes
Like

“Rather than defeat the reader with a family tree which would look like an illustration of the veins and arteries of the human body drawn by a poorly informed maniac, I thought it better to start with this summary of just the heads of the family, so the sequence is clear. I give the year each ruler became Emperor and the year the ruler died. It all looks very straightforward and natural, but of course the list hides away all kinds of back-stabbing, reckless subdivision, hatred, fake piety and general failure, which can readily be relegated to the main text. To save everyone’s brains I have simplified all titles. Some fuss in this area is inevitable but I will cling under almost all circumstances to a single title for each character. To give you a little glimpse of the chaos, the unattractive Philip ‘the Handsome’ was Philip I of Castile, Philip II of Luxemburg, Philip III of Brabant, Philip IV of Burgundy, Philip V of Namur, Philip VI of Artois as well as assorted Is, IIs, IIIs and so on for other places. So when I just refer to Philip ‘the Handsome’ you should feel grateful and briefly ponder the pedantic horror-show you are spared.”
― Simon Winder, Danubia: A Personal History of Habsburg Europe
1 likes
Like

“The bags full of Turkish noses sent by the Uskoks from Senj to Charles V in 1532 may have been one of those gifts more fun to send than to receive,”
― Simon Winder, Danubia: A Personal History of Habsburg Europe
1 likes
Like

“Once he saw the officials of a temple leading away some one who had stolen a bowl belonging to the treasurers, and said, "The great thieves are leading away the little thief.”
― Diogenes
41 likes
Like

“...you have to work and work and work for a salary that isn’t even enough to buy a house or pay for childcare, and you sit at a desk until your spine twists, and your boss is somehow incompetent and a workaholic at the same time and at the end of the day you have to drink to bear it all.”
― Frances Cha, If I Had Your Face
7 likes
Like

“Most people have no capacity for comprehending true darkness, and then they try to fix it anyway.”
― Frances Cha, If I Had Your Face
20 likes
Like