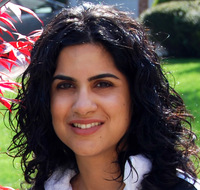 Born
The United States
Website
http://www.henakhan.com
Twitter
henakhanbooks
Member Since
February 2017
edit data
Hena Khan is the award-winning author of the middle grade novels AMINA’S VOICE, MORE TO THE STORY, and the ZAYD SALEEM: CHASING THE DREAM series, and picture books GOLDEN DOMES AND SILVER LANTERNS, CRESCENT MOONS AND POINTED MINARETS, NIGHT OF THE MOON, and UNDER MY HIJAB. She wrote IT'S RAMADAN, CURIOUS GEORGE and the WORST CASE SCENARIO ULTIMATE ADVENTURE MARS and AMAZON books.

“But later that night, as I brush my teeth in the bathroom, I overhear Baba and Thaya Jaan talking in the guest room next door. “

All this music all the time. You shouldn’t let Amina do so much singing and piano,” Thaya Jaan says.

I stop brushing and strain to hear every word, trying to follow.

“But, Bhai Jaan, she is so talented. Her music teachers say she is really quite gifted.”

“Yes, but music is forbidden in Islam. It’s a waste of time and has no benefit. Instead of filling her head with music, she should focus on memorizing Quran.”

The toothpaste suddenly tastes bitter. I spit it out and wait to hear what Baba will say. Surely he’ll say the things he’s always told me, like how music makes him feel closer to God and that my talent is a gift from Allah.

But all Baba says is, “Yes, Bhai Jaan,” and then he stays quiet.

“Bradley Landry toward us. And this time, the three of us look at one another with alarm. Bradley’s the kid who can’t sit still for more than five minutes. In second grade, he was forced to sit on a chair”
― Hena Khan, Amina's Voice
0 likes
Like

“When it’s my turn, I fill my plate with rice, shami kabob, lentils, and butter chicken, skipping the cauliflower and salad, and pile the naan high before carefully carrying it downstairs to the basement. Rabiya, Yusuf, and the other kids are already camped in front of the TV with their food.

Mustafa joins a few minutes later, plopping down on our beat-up leather sofa next to Yusuf.

“There’s nothing good on,” Yusuf announces after flipping through all the channels.

“I want SpongeBob,” a little boy named Jamal says, chewing on a piece of naan.

“How about we tell scary stories?” Yusuf suggests.

“No way,” Rabiya refuses. “Last time I had nightmares for days.”

I agree. Yusuf tells the scariest stories ever. The worst one was about severed hands of bodies that were dug up from graves. The hands came to life and would tickle people to death. I still think about that whenever we pass a graveyard.”
― Hena Khan, Amina's Voice
tags: children-s-tale, fear, humour, imagination, laughter, spooky-tales, storytelling
0 likes
Like