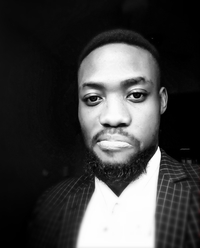 Danniel hasn't connected with his friends on Goodreads, yet.

Born
in Los Angeles, The United States
Website
http://dannielbabajide.com
Twitter
Babajidedannie1
Genre
Fiction, Paranormal, Mystery
Member Since
April 2017
edit data
Danniel Babajide is a Reader, an Author but a full-time independent book publisher. He grew up to love books and African Culture so much that it developed his passion for books. He studied Linguistics and African Languages. He further had honors in African studies at a Nigerian University from South-West Nigeria. He has served as a head writer for the Outland Tv series, produced for media outlets, and brought New and talented Writers into Limelight within just a few years.

He walked through the pathway like a grasscutter as he made his way through the bushes. His face as that of a man who had just wrestled with a lion, as he grunted his own misery. He wore the once beautiful and priceless hat which he inherited from his father and now had become torn and tattered – it happened to be the only gift he could inherit from his father before the gods took his life away. H