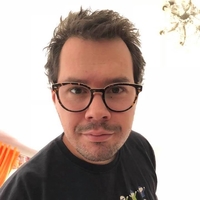 Where did you get the idea for your most recent book?
Miloš Vasić I discovered Kotlin! I think every developer who worked in Java should try it!
flag
Will there be any Java book in the future?
Miloš Vasić Probably yes. Not sure when ;)
flag
See all 7 answers from Miloš Vasić…

“I lived in books more than I lived anywhere else.”
― Neil Gaiman, The Ocean at the End of the Lane
tags: books
4345 likes

“Someday, Locke Lamora,” he said, “someday, you’re going to fuck up so magnificently, so ambitiously, so overwhelmingly that the sky will light up and the moons will spin and the gods themselves will shit comets with glee. And I just hope I’m still around to see it.”
“Oh please,” said Locke. “It’ll never happen.”
― Scott Lynch, The Lies of Locke Lamora
tags: fiction
1122 likes

“If you want to write a negative review, don't tickle me gently with your aesthetic displeasure about my work. Unleash the goddamn Kraken."

“Difficult" and "impossible" are cousins often mistaken for one another, with very little in common.”
― Scott Lynch, Red Seas Under Red Skies
298 likes

“That's a sweet piece," said Jean, briefly forgetting to be aggravated. "You didn't snatch that off a street."

"No," said Locke, before taking another deep draught of the warm water in the decanter. "I got it from the neck of the governor's mistress."

"In the governor's manor."

"In the governor's bed."

"With the governor sleeping next to her."

The night quiet was broken by the high, distant trill of a whistle, the traditional swarming noise of city watches everywhere. Several other whistles joined in a few moments later.

"It is possible," said Locke with a sheepish grin, "that I have been slightly too bold.”
― Scott Lynch, Red Seas Under Red Skies

Scott Lynch
author of
The Lies ...