Discover new books on Goodreads
See if your friends have read any of T.G. Campbell's books 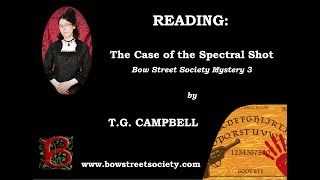 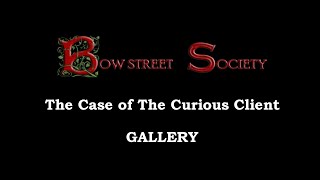 Born
in The United Kingdom
Website
http://www.bowstreetsociety.com
Twitter
BowStSociety
Genre
Crime, Historical Fiction, Mystery
Influences
Agatha Christie, Conan Doyle, Dickens, Chandler
Member Since
September 2016
URL
https://www.goodreads.com/tg_campbell
edit data
Tahnee Georgina Campbell wrote her first crime fiction story at the age of sixteen as a gift for her best friend. At only 40 pages long it fell considerably short of a “novel” but it marked the beginning of a creative journey that would eventually spawn the first of the Bow Street Society mystery novels; The Case of the Curious Client. During that time she attended the University of Winchester where she acquired her Bachelor of Arts Degree in English Studies and wrote a dissertation on the social and cultural importance of the works of Agatha Christie.

The Bow Street Society is a fictional group of amateur detectives, operating in Victorian London, that feature in the murder mystery writings of award winning crime author, T.G. Campbell. Eac Tahnee Georgina Campbell wrote her first crime fiction story at the age of sixteen as a gift for her best friend. At only 40 pages long it fell considerably short of a “novel” but it marked the beginning of a creative journey that would eventually spawn the first of the Bow Street Society mystery novels; The Case of the Curious Client. During that time she attended the University of Winchester where she acquired her Bachelor of Arts Degree in English Studies and wrote a dissertation on the social and cultural importance of the works of Agatha Christie.

The Bow Street Society is a fictional group of amateur detectives, operating in Victorian London, that feature in the murder mystery writings of award winning crime author, T.G. Campbell. Each of its civilian members has been enlisted for their unique skill or exceptional knowledge in a particular field derived from their usual occupation. Members are assigned to cases, by the Society's clerk, Miss Trent, based upon these skills and fields of knowledge. This ensures the Society may work on the behalf of their clients regardless of their client’s social class or wealth; cases that the police either can’t or won’t investigate. From an artist to an illusionist, from an architect to a veterinarian, the Bow Street Society's aim is to provide justice by all and for all.

The Case of The Curious Client won a Book Award with Fresh Lifestyle Magazine, an achievement she is extremely proud of. She's written a monthly feature for the magazine ever since. Her features cover a range of topics from Hidden London to every day life in Victorian era London.

Other works in the Bow Street Society universe are:

Subscribers to the free, monthly, Bow Street Society newsletter - the Gaslight Gazette - are first to read new Casebook short stories. Sneak peeks of upcoming releases, deleted scenes from published works, and news about upcoming book signing events are also included. You may subscribe to the newsletter by visiting the official Bow Street Society website at https://www.bowstreetsociety.com/


I'm fascinated by the supernatural and urban legends as I think both can tell us a lot about our cultural beliefs and social conventions. I've therefore watched lots of TV shows and YouTube videos which cover this subject. I've also researched Spiritualism and the history of seances and talking boards etc for my own writing. Thus, when I pi Read more of this blog post »
Like  •  0 comments  •  flag

“I hope whomever Miss Trent is sending arrives soon.” Mr Maxwell shivered and wrapped his arms about himself. “Who does she usually send to these initial client meetings?”
“I really couldn’t say,” [Miss Dexter] replied, honestly. “Miss Trent sends whomever she feels would be most appropriate.”
― T.G. Campbell, The Case of the Curious Client
tags: crime-fiction, detective-fiction, london, mystery-fiction, victorian-era, women-s-strength
0 likes
Like

“Mr Locke...took a long, slender pick from the unrolled bag and, bending over slightly, inserted it into the lock. It was a steel-cased lock with a smooth, brass knob of around three inches wide and a brass plate around the singular keyhole. Mounted into the door frame was another steel fixture, forming the second half of the lock. Recognising the type of lock, Percy knew the key’s function was to throw the lock’s bolt into dead lock, thus securing the door. Such a design would also include an internal, smaller knob sliding back and forth, drawing back the bolt. A snib, jutting out from the case on the internal side of the door, could be compressed to keep the bolt in an open position, thus allowing one to open and close the door freely. “Do be so kind as to keep an eye out for the return of our friend the constable.” Locke pulled his pocket watch out with his other hand to glance upon it. “We have nine minutes.”
“This is breaking and entering!” Mr Maxwell cried, hurrying up the steps. “Miss Trent said such was forbidden by the Society.”
“Unless there is a sufficiently justifiable reason for doing so,” Mr Locke replied, inserting a second pick into the lower half of the lock. “The welfare of our client is a sufficiently justifiable reason; do you not think so, Mr Maxwell?”
“His welfare?” Mr Maxwell enquired, confused.
Miss Dexter, wholly fascinated by what the illusionist was doing, stepped closer still. She softly enquired, “Do you suspect some harm may have come to Mr Dorsey, Mr Locke?”
“I do not know but Mr Colby was very keen we should not speak with him. Furthermore, Miss Trent’s note stated her telephone conversation with Mr Dorsey was abruptly ended, by him, when another—angry—voice spoke,” Mr Locke explained. There was a sharp click as the bolt sprang back into the lock’s casing. Mr Locke smiled broadly.
“Our constable friend is back.” Mr Maxwell looked panic sticken. “It’s only been a minute.”
“Ah, that will be the Bow Street police station,” Locke replied as he turned the door knob. “Also, they tend to keep a closer eye upon the more affluent residences; greater targets for thieves, you know,” Mr Locke stated as he pushed the door open and ushered both Mr Maxwell and Miss Dexter inside. He’d just closed the door, after slipping in himself, when the constable reached the bottom of the steps and peered up at the porch. Mr Locke stood to the side of the door and watched as the constable, seemingly satisfied all was well, walked away. A glance down at the internal part of the lock confirmed Mr Locke’s earlier assumptions about it. His slender hand slid the smaller brass knob along to lock the bolt in place once more.”
― T.G. Campbell, The Case of the Curious Client
tags: crime-fiction, detective-fiction, magician, thief, victorian-era, victorian-london
0 likes
Like

“Miss Trent opened the Bow Street Society’s office door but didn’t enter; she knew she’d locked it. Slowly she looked over the darkened room until she could make out two silhouettes; one behind the desk, the other to its left. She stared at the latter as she moved forward and closed the door.
“There is a lamp, you know,” she remarked casually. Lifting the glass shade from the kerosene lamp on her desk, she turned on the gas slightly and ignited it with a match. As she carefully increased the lamp’s gas, the faces of Mr Locke and Mr Snyder emerged from the darkness.”
― T.G. Campbell, The Case of the Curious Client
tags: crime-fiction, detective-fiction, victorian-london, victorian-mystery
0 likes
Like

“There is no trap so deadly as the trap you set for yourself.”
― Raymond Chandler, Long Goodbye
2050 likes
Like

“Ability is what you're capable of doing. Motivation determines what you do. Attitude determines how well you do it. ”
― Raymond Chandler
461 likes
Like

“I needed a drink, I needed a lot of life insurance, I needed a vacation, I needed a home in the country. What I had was a coat, a hat and a gun. I put them on and went out of the room.”
― Raymond Chandler, Farewell, My Lovely
254 likes
Like

“I don't mind your showing me your legs. They're very swell legs and it's a pleasure to make their acquaintace. I don't mind if you don't like my manners. They're pretty bad. I grieve over them during the long winter nights.”
― Raymond Chandler, The Big Sleep
tags: detectives, sharp
176 likes
Like

Historical Fiction — 1367 members — last activity 19 hours, 28 min ago
This is a group for all lovers of Historical Fiction and History to share the wonderful books they've read and to discover new books set in the past.

John Bainbridge
author of
The Shado...

M.P. Peacock
author of
Murder on...

Edward Turbeville
author of
Death at ...

Hey there! Thanks for the friend request - I recognize you from Twitter and it's nice crossing paths again ;)