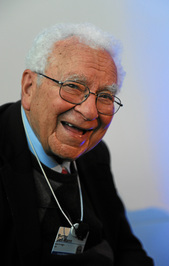 Born
in Manhattan, New York, The United States
September 15, 1929
Died
May 24, 2019
edit data
American physicist who received the 1969 Nobel Prize in physics for his work on the theory of elementary particles. He was the Robert Andrews Millikan Professor of Theoretical Physics Emeritus at the California Institute of Technology, a Distinguished Fellow and co-founder of the Santa Fe Institute, Professor in the Physics and Astronomy Department of the University of New Mexico, and the Presidential Professor of Physics and Medicine at the University of Southern California.

“Today the network of relationships linking the human race to itself and to the rest of the biosphere is so complex that all aspects affect all others to an extraordinary degree. Someone should be studying the whole system, however crudely that has to be done, because no gluing together of partial studies of a complex nonlinear system can give a good idea of the behavior of the whole. ”
― Murray Gell-Mann
tags: complexity, science, systems
30 likes
Like

“In 1963, when I assigned the name "quark" to the fundamental constituents of the nucleon, I had the sound first, without the spelling, which could have been "kwork." Then, in one of my occasional perusals of Finnegans Wake, by James Joyce, I came across the word "quark" in the phrase "Three quarks for Muster Mark." Since "quark" (meaning, for one thing, the cry of a gull) was clearly intended to rhyme with "Mark," as well as "bark" and other such words, I had to find an excuse to pronounce it as "kwork." But the book represents the dreams of a publican named Humphrey Chimpden Earwicker. Words in the text are typically drawn from several sources at once, like the "portmanteau words" in Through the Looking Glass. From time to time, phrases occur in the book that are partially determined by calls for drinks at the bar. I argued, therefore, that perhaps one of the multiple sources of the cry "Three quarks for Muster Mark" might be "Three quarts for Mister Mark," in which case the pronunciation "kwork" would not be totally unjustified. In any case, the number three fitted perfectly the way quarks occur in nature.”
― Murray Gell-Mann, The Quark and the Jaguar: Adventures in the Simple and the Complex
tags: complexity, science
15 likes
Like