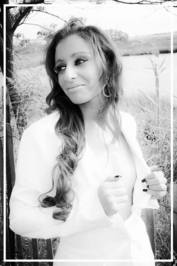 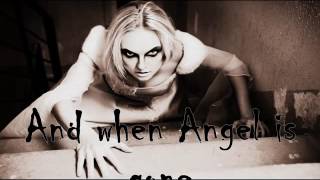 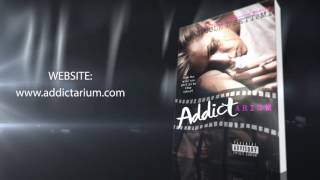 In April of 2010, Nicole lost 95% of her eyesight in her right eye, due to injecting a poisoned bag of heroin, and was shipped to Manhattan’s Bellevue hospital 1,6 Nicole D’Settēmi is a 36-year-old novelist, poet, and visual pop-artist from Niagara Falls, New York. Born in a tiny town bordering Canada only five minutes from the legendary falls, Nicole says she had an eye for beauty at a young age, which included poetry.
She has lived in five regions nationally, including South Florida and New York City, and has always been a self-described poetic, nomadic, creative soul and enthusiast of a variety of artistic mediums, but considers creative writing her number one form of art and feels everything else is just an extension of that passion.

In April of 2010, Nicole lost 95% of her eyesight in her right eye, due to injecting a poisoned bag of heroin, and was shipped to Manhattan’s Bellevue hospital 1,600 miles away from her city at the time, where she had been attending an Art Institute for PhotoJournalism. She was forced to drop her college courses half-way through to her degree, as she began a new, sober life in New York City.

Today, Nicole and her fiance, run what has become a fully operative creative services & marketing firm for authors, artists and the like, and Nicole is the founder & editor of several literary and creative lifestyle publications, in both print & digital formats. Nicole has published a handful of poetry chapbooks, diary excerpts and memoirs with a slew of additional works planned for release from early 2019 on.

Nicole has appeared on the cover of Sexy Glam, International Music Magazine, FLAIM, FWM Magazine, Soul Central, and inside various other publications, highlighting her artistic evolution, poetry series', and memoirs. In 2017, breakawaydaily.com awarded her with the visionary award in arts, and her book received critical acclaim from them as "a must read for all." Nicole is also re-publishing Addictarium: War Stories Chronices, Pt. 1 in paperback this fall, through Prodigy Gold Books!

“These days so many claim the title artist. To me, a creative soul is an artist no matter the profession. With me? When it comes to creativity there's no show. I love art, I love literature, poetry, paintings. There's no show there. I passionately, devotedly, wholly and completely LOVE being creative.”
― Nicole D'Settēmi, Addictarium
tags: addictarium, addiction-memoirs, author-nicole-dsettemi, heroin-memoirs, nicole-d, war-stories
5 likes
Like

“Try to define me, go on I dare YOU. My happy place is screwed up, my happy place, it would SCARE you.”
― Nicole D'Settēmi
tags: authornicoledsettemi
4 likes
Like

“There were days when the saturation of death, and the realities of life, became too great. Days where I felt suffocated, heavy. I’d try to gasp for a breath, and I’d fail. Yet, just in the nick of time, I would somehow, once again, be resuscitated. The world grew dark, cold. A black cloud looming over everything that I saw. People evolved into monsters–caricatures, and EVERYTHING was frightening, everybody was a predator!
The world transformed, and I would choke. Plumes of dust representing reality, as they sought an exit from my mouth, as I wheezed, and I gasped. Reality was choking me, saturating me with its heaviness.
Control? None whatsoever. Not over things, not over people. No, that was Life’s illusion; control was the magic trick. The lack of control, I was truly speaking of, was the inevitable–death. The one thing that tied into everything, everyone. Every neurotic thought, every impulse.
It was Death. The Random Act.”
― Nicole D'Settēmi, Addictarium
tags: addictarium, addiction-and-recovery, asylum, heroin-memoirs, war-stories
0 likes
Like

“Should I ever get married, I actually want a really small wedding. A private ceremony that's shrouded in secrecy. I want something intimate. Something between me and my lover. Not a huge party that is really, this grandiose gesture over something that two people should be celebrating between them, alone, and not the world.”
― Nicole D'Settēmi
tags: nicole-dsettemi
4 likes
Like

“I always felt in a sort of, liquified state. If that makes sense? I think it's interesting because I grew up near such a renowned, gorgeous and enigmatic land mark. Is it possible that nature interferes with and/or conditions us? I think so. At the end of the day, we are organic, we are offspring from the earth, sophisticated bacteria, if you will. So, why wouldn't moods and traits, characteristics, emotions, habits, thought-patterns--why wouldn't all of that be affected by nature? Growing up near water, I sincerely believe, affected me in SOME way.”
― Nicole D'Settēmi, Addictarium
tags: addictarium, nicole-dsettemi, war-stories-chronicles
3 likes
Like

“These days so many claim the title artist. To me, a creative soul is an artist no matter the profession. With me? When it comes to creativity there's no show. I love art, I love literature, poetry, paintings. There's no show there. I passionately, devotedly, wholly and completely LOVE being creative.”
― Nicole D'Settēmi, Addictarium
tags: addictarium, addiction-memoirs, author-nicole-dsettemi, heroin-memoirs, nicole-d, war-stories
5 likes
Like

New Authors Talk Shoppe — 512 members — last activity Oct 15, 2020 03:35PM
Authors come help me define a group where we can get together and talk about the trade.
More of Nicole’s groups…