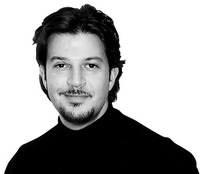 While at UEA, Johnny wrote the first draft of his debut novel The Human Script. He was immediately snapped up by a top London literary agent, but it was another 12 years before the book was published by independent imprint Red Button.

Apart from his wo After publishing a series of award-winning guidebooks about universities and student life, Johnny turned to fiction and became a student at the world-famous MA course in Creative Writing at the University of East Anglia, where he was taught by, among others, Sir Andrew Motion, Lorna Sage and W.G. Sebald. He also mixed with some of the great names in contemporary fiction: Sir Malcolm Bradbury, Ian McEwan, Martin Amis, Doris Lessing, Hanif Kureishi, Ali Smith, Louis de Bernières and many others.

While at UEA, Johnny wrote the first draft of his debut novel The Human Script. He was immediately snapped up by a top London literary agent, but it was another 12 years before the book was published by independent imprint Red Button.

Apart from his work as a writer, Johnny is well known as an expert on higher education and careers. He appears regularly on TV and radio discussing education issues and runs a programme of talks in schools.

He is also said to have discovered a new species of spider and once had a painting shown in the gallery of the BBC programme Take Hart, aged 10.

As for future books, it would depend on the needs of the subject matter. The Human Script suggested this structure very clearly. An idea I have been working on might need a far looser framework that – at the moment – I am conceiving of like a funnel: chapters that grab in ideas from multiple, seemingly unconnected sources with the links between them gradually becoming more apparent before finally resolving into a single universal point of reason.
For this I've been reading about Alexander von Humboldt, the explorer, scientist, politician, rights campaigner and much else besides whose life was so full of variety, but whose lifework was an effort to unify our understanding of the cosmos into an all-encompassing singularity.(less)
flag
See 1 answer from Johnny Rich…

It's been a long time coming, but finally The Human Script is about to be available in paperback.

The trek to publication was arduous. After initially setting several literary agents alight with excitement, it was turned down by every UK mainstream publisher, usually after the intervention of the marketing departments who didn't see it as a commercial hit.

“To reread a book is to read a different book. The reader is different. The meaning is different.”
― Johnny Rich, The Human Script
tags: books, meaning, reader, readers, reading, rereading
17 likes
Like

“The only simple truth is that there is nothing simple in this complex universe. Everything relates. Everything connects”
― Johnny Rich, The Human Script
tags: causality, chaos, chaos-theory, complexity, connection, connects, everything-connects, only-connect, simple, simple-truth, truth, universe
11 likes
Like

“This pain is comfort. It is the solace of physicality, like a touch.”
― Johnny Rich, The Human Script
tags: comfort, feelings, pain, self-harm, suicide, touch
10 likes
Like

“Let us be grateful to the people who make us happy; they are the charming gardeners who make our souls blossom.”
― Marcel Proust
tags: gratitude, happiness
5218 likes
Like

“Love is a striking example of how little reality means to us.”
― Marcel Proust, In Search of Lost Time
tags: love
721 likes
Like

“We do not receive wisdom, we must discover it for ourselves, after a journey through the wilderness which no one else can make for us, which no one can spare us, for our wisdom is the point of view from which we come at last to regard the world. The lives that you admire, the attitudes that seem noble to you, have not been shaped by a paterfamilias or a schoolmaster, they have sprung from very different beginnings, having been influenced by evil or commonplace that prevailed round them. They represent a struggle and a victory.”
― Marcel Proust
222 likes
Like

“Forgetting that beauty and happiness are only ever incarnated in an individual person, we replace them in our minds by a conventional pattern, a sort of average of all the different faces we have ever admired, all the different pleasures we have ever enjoyed, and thus carry about with us abstract images, which are lifeless and uninspiring because they lack the very quality that something new, something different from what is familiar, always possesses, and which is the quality inseparable from real beauty and happiness. So we make our pessimistic pronouncements on life, which we think are valid, in the belief that we have taken account of beauty and happiness, whereas we have actually omitted them from consideration, substituting for them synthetic compounds that contain nothing of them.”
― proust
55 likes
Like

Paul Blaney
author of
The Ancho...