Once again, it's been a while since I last posted, so it's time for an update. Firstly, some good news... my short story, The Ether Existence was published this month in Volume 2, Issue 9 of The New Accelerator . It's an epic space opera this time, so not lights years away from my children's novel, The Crystal Ship , though it's aimed at an older audience. You'll need to pay a membership fee to read it, but it's a small amount which will give you access to a great new story every week, so there are worse ways you could spend your money. Here's the logline...

Feline space pirate, Captain Deno's latest robbery promises to be her greatest success, but this time she may have bitten off more than she can chew, as hidden amongst the spoils is something unexpected... something which could mean big trouble for her and her crew. There'll be battles in space, strange new worlds to explore, and she'll need all of her brains and skill if she's going to survive... 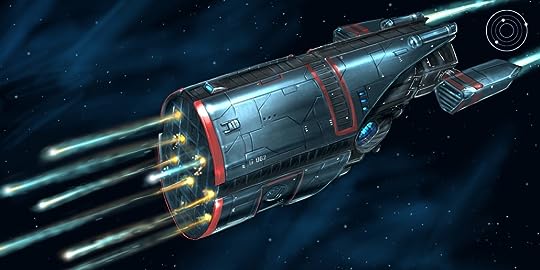 Now for another publication announcement... my newest science fiction story, The Mind Minder is being published in Issue 5 of SERIAL Magazine . This one's a murder mystery set on Mars. It was inspired by my musings on the future of the care industry and has a Philip K. Dick kind of vibe. The magazine is in the final stages of production and will be released within the next few weeks. If you are a fan of sci-fi murder mysteries, then this in one you won't want to miss.

Sticking with the same theme, I neglected to mention at the time, but I had two haiku poems published on the Quatrain.Fish website back in December. The titles are Angel or Dragon? and Insect Inspiration . I'm not going to say anything about the themes, as they speak for themselves, but you'll be pleased to hear that they can be accessed for no charge.

Moving on to Back of the Bookshelf , I'm sorry to say that I've taken the decision to switch to audio only format. The videos have been popular, but the time it is taking to make them just isn't sustainable. It is still my intention to release a video for Episode 9, but that will be the last one for the foreseeable future. Unfortunately, I don't have a release date for this video (which I am conscious is already long overdue); all I can say is work is proceeding as fast as possible.

Episode 10 is also under still preparation, but should be available shortly. The featured story is by Baroness Emma Orczy of Scarlet Pimpernel fame. It's called The Liverpool Mystery, and as the title suggests, is a detective story. It features a character known only as the old man in the corner, who solves unexplained crimes from the comfort of a London tea-room while talking to a female journalist, and was part of a series. Orczy was inspired to write the stories by the success of Sir Arthur Conan Doyle's Sherlock Holmes, but made a conscious decision to make her detective as different from his more famous forerunner as possible. One key departure is that the criminals are not brought to justice and the focus is entirely on the reasoning powers of the old man. It's an interesting take, which I think you'll enjoy.

Check back for further details. That's all for now. Have a great evening.
Like  •  0 comments  •  flag