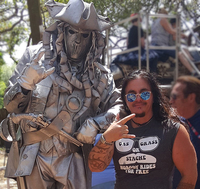 Holy cow, so many book recommendation here, better than what I get on Amazon (always mainstream stuff there)

I'm finding cool stuff just by being a voyeur on my friend's bookshelves.
2 likes · Like  •  0 comments  •  flag

To say the Sadou are a secret club would be an understatement. For the Sadou are to the sexual cults what the Illuminati are to New World Order. Secretive, Wealthy, Powerful, Generations old, and filled to the brim with more dark taboos than most humans can imagine.

Master Clayton not only grew up in the Order, he is one of the more revered members. And he is about to partake in a selection that will give him a young man of his choosing to be his sex, slave boy forever.

Twenty-three are handed over to the selection, handpicked from those who qualify for such honours and asked to be among the entries. Only their identity is kept from Clayton, and as he interviews and explores them all, one of them happens to remind him of his own son, Nathanael.

Warning: Subject matter is devised around pseudo-incest but with intentions to deceive you into thinking it’s the real thing.