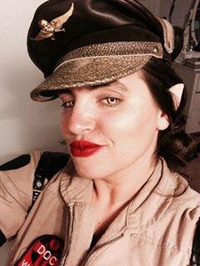 That said, though, if the "block" is less of a plot problem and more of a "motivation problem", I do something that I call "grinding". That is, I tell myself that I'm going to sit down and write at least 100 words. If after 100 words, I'm still feeling unmotivated, I'll chalk it up and try again the next day. Literally *every time* I've tried this technique, I end up writing quite a bit more than 100 words. Sometimes 2000 or 3000 words per session.


My Friends, in case you missed it, SECOND CHANCE ANGEL released on 8 September 2020! If you haven’t checked it out yet, maybe give it a look? It’s a SF Noir mystery that Griffin Barber and I had an absolute blast writing. Here’s our cover copy:

After a devastating galactic war, disgraced veteran Ralston Muck ekes out a living as a bouncer at Last Stop Station’s premier nightclub

The Psyche of War (2 books)
by
Kacey Ezell (Goodreads Author)

“him leap now, bargain and knives forgotten. Fip fluted a farewell, and Blade absently lifted a hand in response, his attention focused on the leashed energy all but vibrating through Ichys. She said nothing while they cleared the maze of stalls and merchants, and still nothing as they made their way through the twisting halls of Whispering Fear’s den. Once they’d reached Ichys’s alcove, she shoved him down on their shared nest of cushions and fabric, and closed them inside. He was fairly sure this meant neither attack, nor that he’d been found out, nor that she’d simply needed to mate, and so he waited, watching the surge of nerves and emotions ripple through her. “The simplest way to join a clan is by being taken as a mate,” she said, pacing in the small space, her eyes fixed on his. “I would hardly call it simple, if done properly,” he demurred, wondering if she was about to ask him something formal. Wondering what he would say if she did. “No jokes.” She waved at him impatiently, paced two more paths through the alcove, then came to a stop and took a breath. “I’m pregnant.” Shock struck, his every claw briefly extended, ears flattened in confusion. He stared back at her for several long moments, not a single thought moving through his usually busy mind. Then he realized the import, and moved, launching across the room, stopping just short of her, and winding his body around hers. “I did it all to secure a life with Whispering Fear,” he said in her ear, taking the buffet of her front leg against his head as his due for such a ridiculous comment. He wanted, more than anything, to tell his dama, and to see Susa’s face brighten in that Human way it had when they had unbearably good news. The inability to do so, to not even discuss Susa with Ichys, made him want to leave the room, find Dirrys, and bury his claws”
― Kacey Ezell, Assassin
0 likes
Like