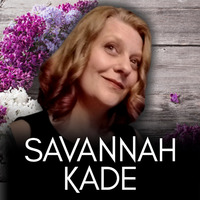 Website
https://www.SavannahKade.com
Genre
Romance
Member Since
April 2020
URL
https://www.goodreads.com/savannahkade
edit data
Romance writer. Rescuer of stray animals. Intersectional feminist.
Family is found. Risks are meant to be taken. Fight for what you believe and what you need.
ₒ✧ₒBelieve in real loveₒ✧ₒ

The next Ticket to True Love book is racing across my keyboard right now. It's a doozy.

I love the cover, and I had an idea of the story a year ago when I agreed to do a book with a Georgia theme. But I saw the cover that artist and author JB Scroeder designed and ... I just _knew_ their story.

Tyler Preston is Noah's brother from Call Me Yours. Brooding and angry about the injury that kept him out Read more of this blog post »
Like  •  0 comments  •  flag

“So here she was stuck on his front porch, untrustworthy, but somehow still welcome.”
― Savannah Kade, WishCraft
tags: love, relationship, trust
0 likes
Like

“For the same reason I can’t cast a spell to make your eyes green. You can’t create what already is. I was in love with you before that.”
― Savannah Kade, WishCraft
tags: confessions, magic, witchcraft
0 likes
Like

“He grinned and she couldn’t help but smile back.

Until something bumped her hip hard enough to scoot her further into the booth.

She registered the shock on Sam’s face first. He was standing to his full height with his fists clenched but held rigidly at his side. He wasn’t going to use them, just yet. Delilah had a flash thought that she admired his restraint, when she registered the voice.

“Hey, Lilah, you out picking up men again?”
Brandon! What was he doing here? “Brandon?”

She looked at him in shock, but he only smiled at her. Somehow a real, genuine smile graced his face, and his cheeks nearly formed dimples.

Sam looked back and forth between the two of them. “You know him?”

She nodded. But Brandon spoke first. “Does he know what you are?”

Delilah blinked. And in that moment, Brandon turned to Sam. “Did you know that she’s sixty? As in, sixty years old. She’s a witch, that’s how she keeps her looks.”

“Sixty?” Sam squinched his eyes at them.

“Wait—” was the only word she got out.

Brandon was talking to her now. “You’re not going to deny that you’re a witch are you, baby?”

“No, but—” She practically sputtered it, but sixty?

Sam was giving them bizarre looks. “Delilah? Are you okay?”

She didn’t get a chance to answer.

Brandon smiled and waved his hand indicating her form. “Of course she’s fine. She’s amazing for twenty, let alone sixty! Her secret is that she bathes in virgin’s blood. It’s how she stays so young looking.”

Sam looked a little sick to his stomach, but he clearly wondered what was going on. Thing was, Delilah didn’t have an answer for him.

Brandon did. He sighed in great theatrics. “And you just would not believe how hard it is to get virgin’s blood these days.”

Sam asked if she was all right and she could only get out a few words, “Thank you, Sam.”

He nodded at her and pulled out a stack of bills to cover the drinks. Brandon waved him away. A look passed between the two men. Delilah could only decipher it as some weird passing of the baton, where she was the baton. Sam smiled at her as he left.”
― Savannah Kade, WishCraft