Bizarre Tales just expanded its universe to those who prefer to read on Google Play Books.

This move was taken to include a greater number of countries where readers are interested in books in English. So hopefully BT shall begin to storm these shores shortly.

As yet, no Bizarre Tales releases have been translated, but if there is any interest in partnering to do so, I'd love to hear from you. Simply reply to this post, or hop on my site, ChrisLAdamsBizarreTales.com/Contact to shoot me an email.

The Valley of Despair featured in March to Other Worlds!

Author Gilbert M. Stack has been generous in including my Edgar Rice Burroughs-style lost race novel, The Valley of Despair, in his annual March to Other Worlds event.

This is a cool event, where Mr. Stack posts reviews of science fiction and fantasy novels. It's especially generous of him in that this gives indie authors a much-needed boost.

Please, stop by and leave a comment. And consider Following Mr. Stack's author page for other events or contacting him to be included. His Occultober event, with a focus on horror throughout the month of October, is just around the corner...

This novel has literally taken me years to finish because of interruptions. I've paused so many times to write other things that I can't recall now what brought about all of these cessations regarding The Banshee of the Atacama . . . Volume 2 in The Tales of the Tomahawk.

But it is at long last available, and I'm quite proud of it.

For years, Ansen Grost has wondered about his parents--what took them to America where they were killed by vengeful Shoshone? Why had they left their homeland of Norway before he was born? After globetrotting for years, he finally sets out to find the answers to these questions only to be summarily drugged and banished from his parents' old village.

Now, drugged, drunk, and raring to fight, he gets his wish when he's dumped on the docks of a little coastal town in the Shetland Isles.

But it's here our story begins after Ansen, typical for him, finds himself strapped for cash and takes on a job for an old Shetlander to find the man's daughter who became lost in Peru.

The tricky part is she has a possessive banshee for a familiar.

The Valley of Despair now available in paperback!

It has taken me a while to convert some of my stories to paperback, so I'm stoked to be able to add this third title to my growing stable of physical books.

The Valley of Despair is a fun tale, very much in the style and topic of Edgar Rice Burroughs where we have a hero who discovers a "lost race" in the midst of the dark, foreboding jungles of Africa (or, since he's a German pilot, Afrika).

It was reviewer Charles Van Buren who mentioned in his review of this title that he would like a sequel, and it was the sequel that I first converted to paper format, thinking Valley was too short to do so.

But where there's a will there is usually a way. With some attention to font size, margins, page size, etc, I was able to make it work.

The sequel, The Cosmos of Despair, is certainly a bizarre yarn, whereas Valley is more straight up lost race with a scyfy twist that I hope you enjoy. 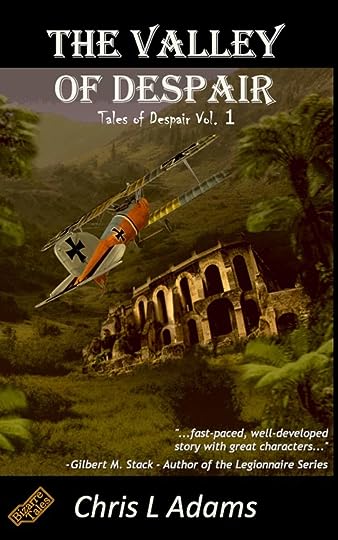 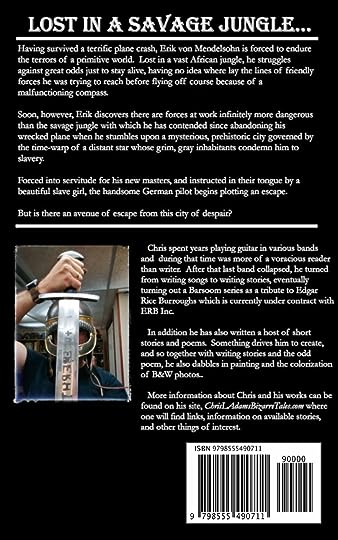 Join Gilbert M. Stack as he reviews a different horror novel each day this month. Gil's events are a lot of fun where one is guaranteed to discover several gems in his posts.
1 like · Like  •  1 comment  •  flag

The Hunter and the Sorcerer now available in Audio!

So this is a first for Bizarre Tales. Fellow author William Hahn did an excellent job narrating The Hunter and the Sorcerer.

We have a limited number of US and UK codes that will get you a free copy of The Hunter and the Sorcerer on audio! This is a no-strings offer.

But, we only have a limited number of codes. To make it fair, we're going to accept emailed requests for codes until the end of September, and then have a drawing to find homes for these codes.

To read the details, hop over to the Bizarre Tales site.

Hear ye, hear ye! That's right. Even as we speak the auditory machine is cranking away at the first-ever, Bizarre Tales audiobook! And yours truly is truly stoked about this.

Fellow author William Hahn expanded into recording book narrations about a year and a half ago. I've listened to his warm, rich tones narrate his own novels, the four-volume Shards of Light series, and loved it.

Imagine my joy now that the comets and stars have aligned and made it possible for him to narrate my latest novel, The Hunter and the Sorcerer, currently available in eBook and paperback, and soon in audio.

I'll post later when this project is available. In the meantime, why not check out some new additions to my growing collection of Bizarre Colorized B&W photos! Famous movie monsters, Edgar Rice Burroughs....it's a really fun hobby that I'm glad I discovered.

I began fiddling with electronic images many, many years ago, but it wasn't until I started writing stories and self-publishing that I started taking it more seriously and putting in the time to learn some of the more advanced tricks.

Why? Because I needed to make covers for all those stories!

But it didn't end there. I'm never bashful about taking on a new hobby, and after I started learning about how to convert old black and white photos to color I just had to try my hand at it.

These have either come to me randomly or been suggested. Eventually I'd like to dive into some old family photos as time allows.

I've been wanting to publish some of my Bizare Yarns in paperback for quite a while now. I always was more of a paperback guy than an eBook guy, and this finally rose to the top of the heap for me to work on.

For anyone wishing a solid copy of The Hunter and the Sorcerer or The Cosmos of Despair , these are now available on Amazon in a handy, 5x8 paperback!

I would have loved to have gone with an old-school, 4 ⅜ x6 ⅜ or so, like the vintage Avons and Aces, but that size wasn't an option--but it should be!

Still, I'm super stoked about this. Having haunted used bookstalls in my youth in daring quests to find those coveted copies that seemed so elusive back in the days before the internet, I'm tickled pink at the thought of coming across a used, raggedy copy of a Bizarre Tale one day.

Richard Dee's Life and Other Dreams

I was quite thrilled when independent author Richard Dee offered to host me on his Indie Showcase where he promotes other Indie authors--which I find quite generous in a cut-throat world where everyone is striving for attention.

Curious as to what sort of writer Richard was, I purchased a copy of one of his novels at random, and think I made a fine choice.

Life and Other Dreams is a neat novel about two radically different men from different worlds and times who dream of one another's lives.

But for Rick, the 21st century Earthman, his dreams are becoming somewhat of a problem.

In a gesture of good faith and honesty, he reveals to his wife that he dreams of being a settler on another world 600 years in the future, and of his marriage to a beautiful woman with whom he enjoys this unfettered lifestyle of exploring a new, Earth-like world.

Unsurprisingly, his wife isn't thrilled. And therein begins the problems for our humble Earthman.

Quite an enjoyable read for any who likes their sci-fi mixed with a little mystery. The characters are sprinkled with real-life problems, which, to me, adds to the realism and also exacerbates the contrasting lives of the two men.

While you're picking up a copy of Richard's novel, don't forget to check out his site and also the latest release from Bizarre Tales ... The Hunter and the Sorcerer!
Like  •  0 comments  •  flag

Should a reader find stories such as these of interest they might enjoy the tales I've made available online. Each is an attempt to construct something unique and enjoyable.

For sure, they will touch on the broader themes we fans of these various genres all love to read and reread; lost cities, magical Jinns, Lovecraftian monsters, the hair raising encounter with something grim, the clash and clang of a sword-fight.

But, also it is the hope of this author that the reader will encounter other things they may or may not have come across before: unexpected twists, memorable characters strange inventions.