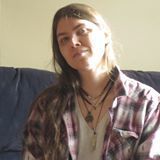 “I lived in books more than I lived anywhere else.”
― Neil Gaiman, The Ocean at the End of the Lane
tags: books
4605 likes

“I was my usual charming morning self, threatening blood feud with anyone fool enough to disturb my dreams.”
― Glen Cook, The Black Company
18 likes

“Kell wore a very peculiar coat.
It had neither one side, which would be conventional, nor two, which would be unexpected, but several, which was, of course, impossible.
The first thing he did whenever he stepped out of one London and into another was take off the coat and turn it inside out once or twice (or even three times) until he found the side he needed. Not all of them were fashionable, but they each served a purpose. There were ones that blended in and ones that stood out, and one that served no purpose but of which he was just particularly fond.”
― V.E. Schwab, A Darker Shade of Magic
tags: kell
157 likes

“It had become one of the defining truths of my life that, no matter how I tried to keep them flattened, two-dimensional, jailed in paper and ink, there would always be stories that refused to stay bound inside books. It was never just a story. I would know: a story had swallowed my whole life.”
― Ransom Riggs, Library of Souls
95 likes