Discover new books on Goodreads
See if your friends have read any of Derek A. Kamal's books

I’ve been playing and thinking a lot about Tacticus of late and choose to write a little review. I publish it here because, honestly, among my flotilla of outlets this is the closest to a fit. 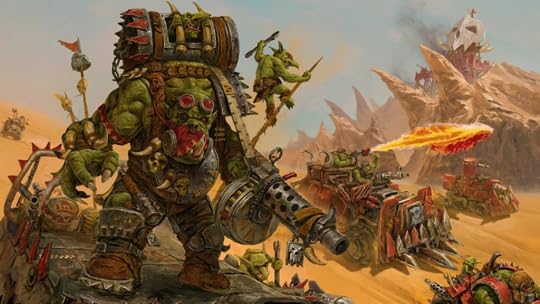 Anyways. Let us begin with the bad.

As I mentioned in another post, Tacticus subscribes to the gacha model of profiteering that so plagues contemporary gaming (and mobile gaming in particular). I get it. It’s

“Despair, or folly?' said Gandalf. 'It is not despair, for despair is only for those who see the end beyond all doubt. We do not. It is wisdom to recognize necessity, when all other courses have been weighed, though as folly it may appear to those who cling to false hope. Well, let folly be our cloak, a veil before the eyes of the Enemy! For he is very wise, and weighs all things to a nicety in the scales of his malice. But the only measure that he knows is desire, desire for power; and so he judges all hearts. Into his heart the thought will not enter that any will refuse it, that having the Ring we may seek to destroy it. If we seek this, we shall put him out of reckoning.'
'At least for a while,' said Elrond. 'The road must be trod, but it will be very hard. And neither strenght nor wisdom will carry us far upon it. This quest may be attempted by the weak with as much hope as the strong. Yet such is oft the course of deeds that move the wheels of the world: small hands do them because they must, while the eyes of the great are elsewhere.”
― J.R.R. Tolkien, The Fellowship of the Ring
78 likes

“I look East, West, North, South, and I do not see Sauron; but I see that Saruman has many descendants. We Hobbits have against them no magic weapons. Yet, my gentlehobbits, I give you this toast: To the Hobbits. May they outlast the Sarumans and see spring again in the trees.”
― J. R. R. Tolkien
tags: inspirational
29 likes