Discover new books on Goodreads
See if your friends have read any of J. Whitney Williams's books 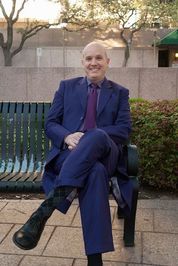 “I knowed a man in Paphlagonia who'd swallow a live snake every morning, when he got up. He used to say, he was certain of one thing, that nothing worse would happen to him all day. 'Course they made him eat a bowlful of hairy centipedes before they hung him, so maybe that claim was a bit presumptive.”
― Neil Gaiman, Stardust
69 likes

“Tristan and Yvaine were happy together. Not forever-after, for Time, the thief, eventually takes all things into his dusty storehouse, but they were happy, as these things go, for a long while”
― Neil Gaiman, Stardust
273 likes

“Because of the self-confidence with which he had spoken, no one could tell whether what he said was very clever or very stupid.”
― Leo Tolstoy, Война и мир
tags: confidence
335 likes

“Here I am alive, and it's not my fault, so I have to try and get by as best I can without hurting anybody until death takes over.”
― Leo Tolstoy, Война и мир
180 likes

“According to the biblical tradition the absence of work -- idleness -- was a condition of the first man's state of blessedness before the Fall. The love of idleness has been preserved in fallen man, but now a heavy curse lies upon him, not only because we have to earn our bread by the sweat of our brow, but also because our sense of morality will not allow us to be both idle and at ease. Whenever we are idle a secret voice keeps telling us to feel guilty. If man could discover a state in which he could be idle and still feel useful and on the path of duty, he would have regained one aspect of that primitive state of blessedness. And there is one such state of enforced and irreproachable idleness enjoyed by an entire class of men -- the military class. It is this state of enforced and irreproachable idleness that forms the chief attraction of military service, and it always will.”
― Leo Tolstoy, Война и мир
30 likes