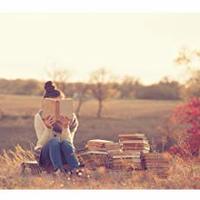 Deany Ray has always wanted to be a writer so she decided to take the plunge and dive into it.
She loves writing cozy mysteries, as this is what she likes to read the most.
Her favorite activities are traveling, going to the movie theatre, meeting up with friends and having cooking sessions with her awesome mom. https://www.facebook.com/deanyraybooks/

Deany Ray has always wanted to be a writer so she decided to take the plunge and dive into it.
She loves writing cozy mysteries, as this is what she likes to read the most.
Her favorite activities are traveling, going to the movie theatre, meeting up with friends and having cooking sessions with her awesome mom. ...more

“can right here,” Marge replied and looked inside. “The thing is empty.” Celeste smiled at the sight of Marge finally trapping a paper between her oversized colorful mitts. “Thank you, Suzy Homemaker. All you need is an apron.” While we hurried to search the room, the doorbell rang. Drat. The three of us froze. We had every right to be here and I was getting tired of explaining that to Alex. I was hoping we’d be gone before he showed up at the door. We headed to the landing to see Deborah peeking out the window. She nodded when she saw us. “Yes, I’m afraid it’s him,” she whispered. I knew what was coming next: a mournful look from Alex, along with a little speech about interference with an important police investigation. Could we get in trouble? What were exactly the rules when we were working in a private home and hired by the homeowner? I’d promised him I’d be careful. But surely we had every right to be here, working for our client. The gig was up in any case. Alex had surely seen Marge’s car out front. “Let’s hurry to the couch,” I said, keeping my voice very low. “Then he might think that we’re only here to talk and to consult with Deborah.” “Quick, let’s go,” Celeste said. “Deborah, could you hold off for just a second before you let him in?” Deborah scowled. “I don’t really want to let him in at all. He’s a looker, but obnoxious. You take your time. He can cool his heels and wait.” Celeste wasn’t taking any chances. “Go!” she said, touching me on the back since I was closest to the stairs. Things moved quickly from that point. As I tended to do at the most important times, I tripped and fell flat on my face. Thankfully, my glasses stayed on. I’d nearly made it safely down the stairs when my foot got caught on the carpet. Marge and Celeste were right behind me, almost flying in their haste. We ended up in one big pile in front of a frowning Deborah. “And you’re sure that you’re detectives?” she asked doubtfully. “The real official thing,” Marge squeaked, rubbing her shoulder with the bright orange oven mitt. We limped to the couch as Deborah headed to the door. I heard a familiar voice as she let him in, and we arranged ourselves oh so casually on the couch, as if we’d been there all along. Alex wasn’t pleased at all. He and Deborah were both scowling as they walked into the room. And for all the unpleasantness, we hadn’t found a thing. Operation Search the Office Before Alex had not been a success. Chapter Seven Despite the pain in my left knee (and the tight quarters on the loveseat), I tried to look the part of an innocent working woman who’d come to talk – and only talk – to a client in distress. “What are you three up to?” Alex gave us a”
― Deany Ray, Diced
0 likes
Like

Is this you? Let us know. If not, help out and invite Deany to Goodreads.