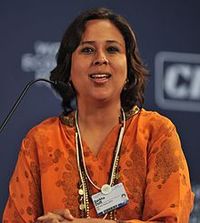 Born
New Delhi, India
edit data
Barkha Dutt is an Indian television journalist and columnist. She works as a consulting editor with NDTV. Dutt gained prominence for her reportage of the Kargil War. Dutt has won many national and international awards, including the Padma Shri, India's fourth highest civilian honour.

Dutt has co-authored the chapter "'Nothing new?':Women as Victims" in the book Gujarat:The making of a tragedy, edited by Siddharth Varadarajan and published by Penguin (ISBN 978-0143029014). The book is about the 2002 Gujarat riots. Barkha later wrote a book "The Uniquet Land" which was released in December 2015

“In the notoriously fickle drawing rooms of Delhi, I had often heard Rahul being described as not-too-bright (in far less charitable terms). But the few times I had spoken with him I had thought otherwise. He was well read, respectful of academic expertise, and keen to meet specialists to mine their minds. His problem was not that he had read too few books—it was that he had a clinical, statistical approach to a profession that was often about instinct and human connections. He was like a man looking for the exactitudes of mathematics in the mysteries of poetry.”
― Barkha Dutt, This Unquiet Land: Stories from India's Fault Lines
3 likes
Like

“But the Congress also played an insidious role in creating the circumstances that led to the demolition of the mosque. Though Rahul Gandhi once grandly claimed that the mosque would never have been brought down had a member of the Nehru-Gandhi family been at the helm of government, it was his father, Rajiv Gandhi, who on the request of the VHP first ordered the locks on the Ram Janmabhoomi–Babri Masjid complex to be opened in 1985. And in 1989, with one eye on the elections, it was Rajiv who sent his home minister, Buta Singh, to participate in the ‘shilanyas’, or the symbolic temple foundation laying ceremony, at a site near the Babri Masjid but outside of what he understood to be the disputed site. After his assassination in 1991 it became the responsibility of Narasimha Rao to safeguard the mosque from demolition. The Liberhan Report said Prime Minister Rao and his government were ‘day-dreaming’; his own party colleagues and those who met him in the days leading up to 6 December say his inaction was deliberate. Veteran journalist Kuldip Nayar even went so far as to suggest in his memoirs that Rao ‘sat at a puja when the kar sevaks began pulling down the mosque and rose only when the last stone had been removed’.”
― Barkha Dutt, This Unquiet Land: Stories from India's Fault Lines
2 likes
Like

“In March 2015, sixteen accused policemen were acquitted of their involvement in the Hashimpura massacre, making minorities even more cynical about the promises of justice from secular parties. The case dated back to 1987 when riots had erupted in Meerut. Men from UP’s Provincial Armed Constabulary (PAC) dragged out young Muslim men, most of them poor daily wagers and weavers, drove them to the Upper Ganga Canal in Ghaziabad instead of to the police station, and threw them in one by one. V. N. Rai, who was superintendent of police in Ghaziabad, wrote a chilling account of how the police—who described Meerut as a ‘mini Pakistan’ and held the Muslims solely responsible for the violence—had behaved. ‘Every survivor who hit the ground after being shot at tried hard to pretend he is dead and most hanged on the canal’s embankments with their heads in water and the body clutched by weeds to show to their killers that they were dead and no more gunshots fired at them. Even after the PAC personnel had left, they lay still between water, blood and slush. They were too scared and numbed even to help those who were still alive or half dead.”
― Barkha Dutt, This Unquiet Land: Stories from India's Fault Lines
2 likes
Like

Is this you? Let us know. If not, help out and invite Barkha to Goodreads.