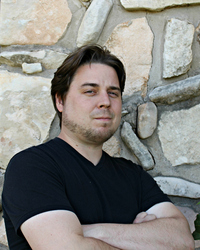 He lives in Texas with his wife and five children.

Real Murder is Hard to Come By

I've put another novella up on a Amazon. This one's a crime story, called Real Murder is Hard to Come By. Here's a blurb:

Anyone with a brain could tell you stealing murders is a bad idea. The problem is Howard Maynard only has half of one.

The doctors even did it to him on purpose. They had to, in order to relieve his uncontrollable seizures. The seizures were stopped, but at the cost of his

Aaron Wright is currently reading
Arm of the Sphinx (The Books of Babel, #2)
by Josiah Bancroft (Goodreads Author)
bookshelves: currently-reading