Ghosts, black-eyed children, and shadows that come to life. What kind of curse has settled upon the mysterious city of Mount Herod?

The first three novels from the Mount Herod Legends series are now together in one binge-worthy ebook.
Like  •  0 comments  •  flag

When 7th Grade English & Language Arts teacher Alicia Siebers of Nikolay Middle School in Cambridge, Wisconsin decided to feature Curse of the Black-Eyed Kids as her latest #FirstChapterFriday, she was just hoping to "spark more interest in reading and get more books (& less technology) in kids' hands."

The result was beyond her expectation.

"Of all the books that I've used this year, [Curse of the Black-Eyed Kids] definitely caused the most excitement...several students commented on how they loved the specific detail of the darkness in your first chapter, and I had several others mention that they'd love to see this as a movie!" Ms. Siebers said in an email conversation.

The appeal of the Mount Herod Legends series of YA horror novels may lie in the fact that they manage to maintain a reasonable regard for non-explicit material while still providing plenty of scares and story depth—something adult readers appreciate as much as young adults.

If you haven't picked up a Mount Herod Legends book, yet, you can download free previews of the growing series at coreyjpopp.com.
Like  •  0 comments  •  flag

On a snowy Wednesday afternoon in November, I stopped by the Highlands complex in Neenah, Wisconsin for a guest speaking engagement with the Wisconsin Chapter of the international Philanthropic Educational Organization.

The 150 year-old Philanthropic Educational Organization (PEO) has 225,000 members in 6,000 chapters located throughout North America. PEO celebrates the advancement of women; educates women through scholarships, grants, awards, loans, and stewardship of Cottey College, and motivates women to achieve their highest aspirations.

After making opening remarks about my writing career and the first three books of the Mount Herod Legends series of young adult novels, I fielded questions about how I came to write the series as well as my personal writing habits, such as how I hold a full-time job while writing full-length novels on the side.

I enjoy speaking engagements, especially the Q&A sessions and the one-on-one conversations that occur afterwards. Someone always approaches me--either a former writer or a future writer--inspired to pick up the pen once again or maybe for the first time ever.

If you represent a school or other organization interested in booking an author appearance, please visit my website, coreyjpopp.com, for information on how to book an appearance.
Like  •  0 comments  •  flag

Beneath Claire's House recently hit #2 on the Amazon Ghost Fiction Best Seller list, right between Stephen King's audiobook and mass market paperback editions of The Shining and in the company of other ghost-story masters like Shirley Jackson, Heather Graham, and Neil Gaiman. 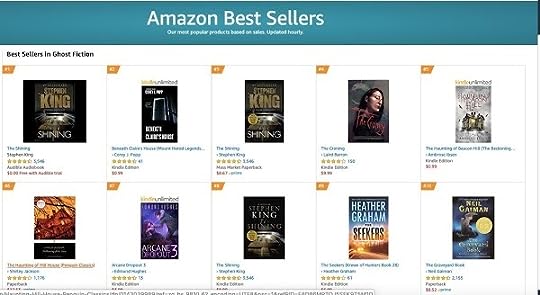 Three strangers' lives collide in a bizarre legend from the mysterious city of Mount Herod.

High-schooler Tommy Wexler rediscovers a twisted childhood friend, while single-mom Irene Baxter struggles to cope with her six-year-old daughter's frightening supernatural abilities. Across the city, one of Mount Herod's elite residents, Malcolm Gladstone, makes a discovery so extraordinary it awakens a dark temptation.

Lost and confused, these three individuals soon find themselves in an unimaginable clash of rage, denial, and greed that will solidify their roles in the growing saga of Mount Herod Legends.

NOW AVAILABLE on Kindle and paperback.

I'm very flattered to have been mentioned in Maddy Mikinski's great article on Medium, titled "The Women Who Built America: What an 130 year-old book club can tell us about our future."

The local chapter of one of the oldest women's organizations in North America has invited me to speak at their November 13, 2019 meeting.

The 150 year-old Philanthropic Educational Organization (PEO) has 225,000 members in 6,000 chapters located throughout North America. PEO celebrates the advancement of women; educates women through scholarships, grants, awards, loans, and stewardship of Cottey College, and motivates women to achieve their highest aspirations.
Like  •  0 comments  •  flag

Mary Shandonay, a teacher at Neenah High School, became intrigued with Beneath Claire's House when one of her English/Lit 10 students did an enthusiastic book conference on the young adult horror novel.

During the conference, the student revealed the book had been written by a friend's father and local novelist (spoiler: I'm the author). The student said Mrs. Shandonay could have her copy of the novel since she had another at home, and she would leave it in the library.

Curious, Mrs. Shandonay picked up the book from the high school library to read for herself. She enjoyed it so much she decided to bring it into her classroom, where her students share her love of scary stories.

Recently, Mrs. Shandonay and I had a conversation about what enthused her about the book and why she decided to introduce it to her workshop students.

Mrs. Shandonay was intrigued by the heavily fictionalized Wisconsin landscape--including the fabricated communities of Harrison and Mount Herod. As a one-time resident of a Wisconsin town named Harrison, she wondered aloud if there was a real-life connection. I explained the book contained a heavy dose of fictionalized lore as well as Wisconsin-inspired "Easter eggs," and although her "Harrison" may not exactly match the fictional town of Harrison in the book, it's always fun for a reader to imagine a story taking place right in her own backyard.

Additionally, she liked the length and clarity of the chapters, two important factors which make it possible for students to read a lot of chapters within the 53-minute time frame of the class. When a student can read a book using class time alone, the end result usually equals success.

Most importantly, she said she found the book entertaining. A healthy inclusion of legitimate scares along with the absence of graphic adult situations and language makes Beneath Claire's House a mature yet suitable selection for high school English classes.

Mrs. Shandonay revealed she recently added Curse of the Black-Eyed Kids, the second book in the Mount Herod Legends series, to her Goodreads "To-Read" list and is patiently awaiting the upcoming release of the third book of the series, due later in 2019. 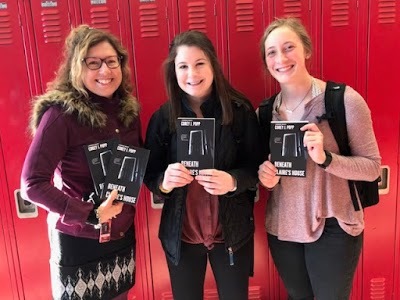 The recent 99¢ Halloween sale of the Kindle editions of Beneath Claire's House and Curse of the Black-Eyed Kids pushed Curse into the Number 2 position on the Amazon Best Seller list for Occult Ghosts and Haunted Houses. The sale also pushed it up into the Top 20 Best Sellers in Ghost Fiction, where it sat amongst classics by Stephen King and Neil Gaiman.

The release of the third book in the Mount Herod Legend's series is just months away. If you'd like to receive an email upon its release, please sign up for my mailing list on www.coreyjpopp.com 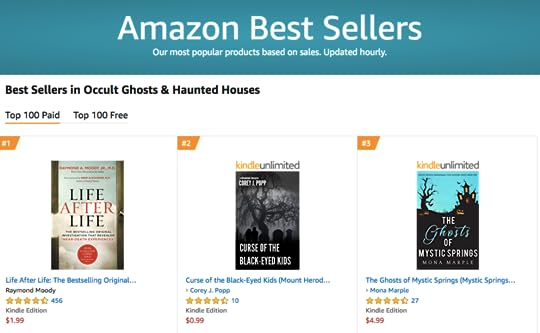 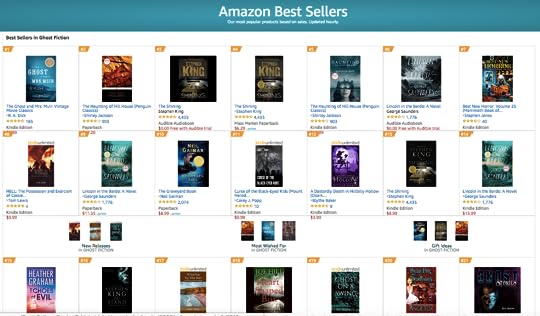 Curse of the Black-Eyed Kids takes place in mid-October, just weeks before Halloween.

Not too far from where I live, on my way to work each day, I pass through the real-life neighborhood on which I based Abby and Jeremy's neighborhood.

Today, while driving through the neighborhood once again, I was inspired by how much it reminded me of the scene in the excerpt below and how close the actual date was to the date in the story.

Jeremy was right. I didn’t sleep.

Now we both walk to school exhausted. I can’t imagine what the next seven hours will be like on no sleep, but they certainly can’t be as bad as the past five.

Along the sidewalk on which we walk, towering oaks drop leaves like raindrops. A chilly breeze spins a tiny whirlwind of dead leaves across a front yard and deposits it near a sewer grate in the curb. Jeremy, puffing heavily, walks by my side, but we haven’t spoken since we left home. We’ll split off in a block or so at Lexington Avenue

A block down this real-life street is an intersection, and although the cross street isn't called Lexington Avenue, just a few more blocks beyond it sits a middle school, the middle school I imagined Jeremy walking to as he and Abby parted ways each morning.

With the above scene on my mind, I pulled my truck off to the side of the road and snapped the pic below with my iPhone. 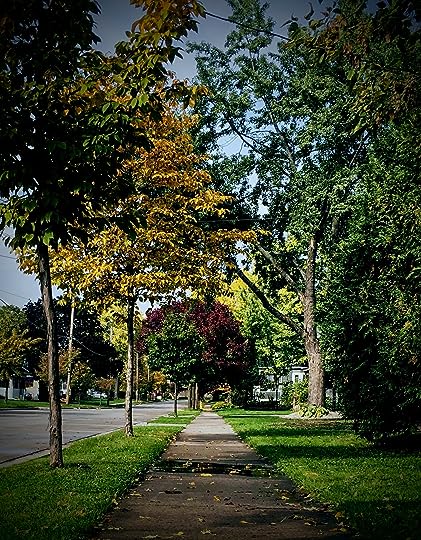