Discover new books on Goodreads
See if your friends have read any of Phyllis A. Tickle's books 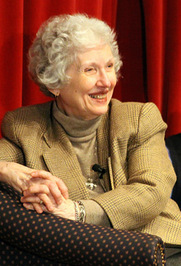 Series by Phyllis A. Tickle

The Divine Hours (3 books)
by
Phyllis A. Tickle (Compilation)

Quotes by Phyllis A. Tickle

“Religion, whether we like it or not, is intimately tied to the culture in which it exists. One can argue—with only varying degrees of success, though—that private faith can exist independent of its cultural surround. When, however, two or three faith-filled believers come together, a religion—possibly more of a nascent or proto-religion—is formed. Once formed, it can never be separated entirely from its context. Just as surely as one of the functions of religion is to inform, counsel, and temper the society in which it exists, just so surely is every religion informed and colored by its hosting society. Even a religion’s very articulation of itself takes on the cadences, metaphors, and delivery systems of the culture that it is in the business of informing. Thus, when we look at these semi-millennial tsunamis of ours, we as Christians must be mindful of the fact that the religious changes effected during each of them were only one part of what was being effected, and that all the other contemporaneous political, social, intellectual, and economic changes were intimately entwined with the changes in religion and religious thought.”
― Phyllis Tickle, Emergence Christianity: What It Is, Where It Is Going, and Why It Matters
7 likes
Like

“Keep watch, dear Lord, with those who work, or watch, or weep this night, and give your angels charge over those who sleep. Tend the sick, Lord Christ; give rest to the weary, bless the dying, soothe the suffering, pity the afflicted, shield the joyous; and all for your love’s sake. Amen.”
― Phyllis A. Tickle, The Divine HoursTM, Pocket Edition
6 likes
Like

“I’m not out to save the world, just to be part of it.”
― Phyllis Tickle, Emergence Christianity: What It Is, Where It Is Going, and Why It Matters
4 likes
Like

See all Phyllis A. Tickle's quotes »