Writing 'A Pair of Blue Eyes' 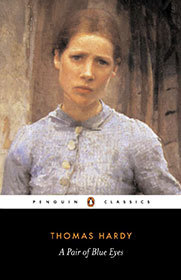 The cover to a recent mass-market edition
of Thomas Hardy's third novel
A Pair of Blue Eyes.A Pair of Blue Eyes was Thomas Hardy's third novel. It is an interesting transitional book in that contains, like the two prior to it, conceptual threads of his never-published first effort The Poor Man and the Lady. Unlike those books, it was written entirely after his introduction to his future wife, E Read more of this blog post »
View more on Rob Vollmar's website »
Like  •  0 comments  •  flag

Rob is currently reading
Environment, Power, and Society for the Twenty-First Century: The Hierarchy of Energy
by Howard T. Odum
bookshelves: currently-reading

Rob is currently reading
How Everything Can Collapse: A Manual for Our Times
by Pablo Servigne
bookshelves: currently-reading

“The tearful glimmer of the languid dawn' was just sufficient to reveal to them the melancholy red leaves, lying thickly in the channels by the roadside, ever and anon loudly tapped on by heavy drops of water, which the boughs above had collected from the foggy air.”
― Thomas Hardy, Desperate Remedies
4 likes
Like

J. David Osborne
author of
By The Ti...

Wallace Stevens
author of
The Colle...