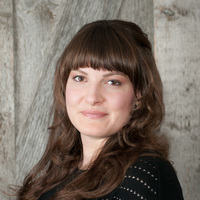 Born
Canada
Website
http://www.caseygriffin.com
Genre
Romance, Contemporary, Young Adult
Member Since
November 2015
edit data
Casey Griffin spent her childhood dreaming up elaborate worlds and characters. Now she writes those stories down. As a jack of all trades, her resumé boasts registered nurse, heavy equipment operator, English teacher, photographer, and pizza delivery driver. She’s a world traveler and has a passion for anything geeky. With a wide variety of life experiences to draw from, she loves to write stories that transport readers and make them smile. Casey lives in Southern Alberta with her family, and when she’s not traveling, attending comic conventions, or watching Star Wars, she’s writing every moment she can.

“Senior year was about to begin. It meant a fresh start, a chance to really come out of her shell. This year, Katie would be confident, sexier, funnier. She’d be a better version of herself, someone who things happened for. She’d come first in life and not dead like she was used to.”
― Casey Griffin, Playing Her Secret Crush
0 likes
Like

“Although she wasn’t used to wearing so much makeup, she’d read that giving yourself a makeover gave you a boost of confidence. When she walked through the doors into Porterville High, she wanted heads to turn.”
― Casey Griffin, Playing Her Secret Crush
0 likes
Like

“From its depths, she pulled out the little bag she’d been stashing all summer. Her secret weapon for The Plan to get noticed: a new, lacy red pushup bra. Not that anyone would see it was lacy or red for that matter. Or would they? Eventually, maybe, but she was getting way ahead of herself.

The point was she was going to know she was wearing it. It would make her feel confident, like all those Victoria’s Secret models. And magazines always said the sexiest feature on a woman was confidence. If only that had come in a bottle at the cosmetics counter, too.”
― Casey Griffin, Playing Her Secret Crush
0 likes
Like