Russell’s articles have been published in Miniature Wargames, Wargames Illustrated, The Wargames Website, and the Society of Twentieth Century Wargamers‘ Journal. He has been interviewed on BBC Radio Stoke, The WW2 Podcast, The Voice of Russia, and Cold War Conversations.

A Strange Campaign available for pre-order 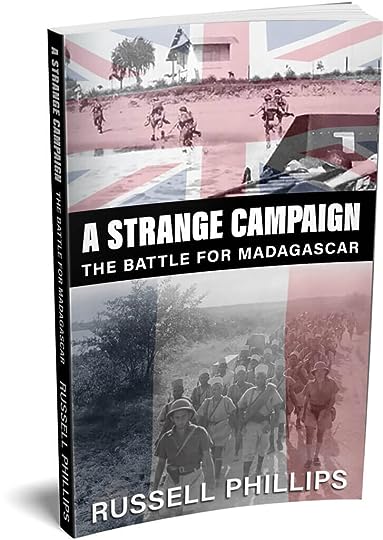 On 5th May next year my next book, A Strange Campaign: The Battle for Madagascar, will be published. This coincides with the anniversary of Operation Ironclad, which marked the start of the campaign.

Russell Phillips is currently reading
Who Dares Wins - The SAS and the Iranian Embassy Siege 1980
by Gregory Fremont-Barnes
bookshelves: currently-reading

“Tracked Vehicles "Each war proves anew to those who may have had their doubts, the primacy of the main battle tank. Between wars, the tank is always a target for cuts. But in wartime, everyone remembers why we need it, in its most advanced, upgraded versions and in militarily significant numbers." - IDF Brigadier General Yahuda Admon (retired) Since their first appearance in the latter part of World War I, tanks have increasingly dominated military thinking. Armies became progressively more mechanised during World War II, with many infantry being carried in armoured carriers by the end of the war. The armoured personnel carrier (APC) evolved into the infantry fighting vehicle (IFV), which is able to support the infantry as well as simply transport them. Modern IFVs have a similar level of battlefield mobility to the tanks, allowing tanks and infantry to operate together and provide mutual support. Abrams Mission Provide heavy armour superiority on the battlefield. Entered Army Service 1980 Description and Specifications The Abrams tank closes with and destroys enemy forces on the integrated battlefield using mobility, firepower, and shock effect. There are three variants in service: M1A1, M1A2 and M1A2 SEP. The 120mm main gun, combined with the powerful 1,500 HP turbine engine and special armour, make the Abrams tank particularly suitable for attacking or defending against large concentrations of heavy armour forces on a highly lethal battlefield. Features of the M1A1 modernisation program include increased armour protection; suspension improvements; and an improved nuclear, biological and chemical (NBC) protection system that increases survivability in a contaminated environment. The M1A1D modification consists of an M1A1 with integrated computer and a far-target-designation capability. The M1A2 modernisation program includes a commander's independent thermal viewer, an improved commander's weapon station, position navigation equipment, a distributed data and power architecture, an embedded diagnostic system and improved fire control systems.”
― Russell Phillips, This We'll Defend: The Weapons & Equipment of the US Army
0 likes
Like

“M113 Family of Vehicles Mission Provide a highly mobile, survivable, and reliable tracked-vehicle platform that is able to keep pace with Abrams- and Bradley-equipped units and that is adaptable to a wide range of current and future battlefield tasks through the integration of specialised mission modules at minimum operational and support cost. Entered Army Service 1960 Description and Specifications After more than four decades, the M113 family of vehicles (FOV) is still in service in the U.S. Army (and in many foreign armies). The original M113 Armoured Personnel Carrier (APC) helped to revolutionise mobile military operations. These vehicles carried 11 soldiers plus a driver and track commander under armour protection across hostile battlefield environments. More importantly, these vehicles were air transportable, air-droppable, and swimmable, allowing planners to incorporate APCs in a much wider range of combat situations, including many "rapid deployment" scenarios. The M113s were so successful that they were quickly identified as the foundation for a family of vehicles. Early derivatives included both command post (M577) and mortar carrier (M106) configurations. Over the years, the M113 FOV has undergone numerous upgrades. In 1964, the M113A1 package replaced the original gasoline engine with a 212 horsepower diesel package, significantly improving survivability by eliminating the possibility of catastrophic loss from fuel tank explosions. Several new derivatives were produced, some based on the armoured M113 chassis (e.g., the M125A1 mortar carrier and M741 "Vulcan" air defence vehicle) and some based on the unarmoured version of the chassis (e.g., the M548 cargo carrier, M667 "Lance" missile carrier, and M730 "Chaparral" missile carrier). In 1979, the A2 package of suspension and cooling enhancements was introduced. Today's M113 fleet includes a mix of these A2 variants, together with other derivatives equipped with the most recent A3 RISE (Reliability Improvements for Selected Equipment) package. The standard RISE package includes an upgraded propulsion system (turbocharged engine and new transmission), greatly improved driver controls (new power brakes and conventional steering controls), external fuel tanks, and 200-amp alternator with four batteries. Additional A3 improvements include incorporation of spall liners and provisions for mounting external armour. The future M113A3 fleet will include a number of vehicles that will have high speed digital networks and data transfer systems. The M113A3 digitisation program includes applying hardware, software, and installation kits and hosting them in the M113 FOV. Current variants: Mechanised Smoke Obscurant System M548A1/A3 Cargo Carrier M577A2/A3 Command Post Carrier M901A1 Improved TOW Vehicle M981 Fire Support Team Vehicle M1059/A3 Smoke Generator Carrier M1064/A3 Mortar Carrier M1068/A3 Standard Integrated Command Post System Carrier OPFOR Surrogate Vehicle (OSV) Manufacturer Anniston Army Depot (Anniston, AL) United Defense, L.P. (Anniston, AL)”
― Russell Phillips, This We'll Defend: The Weapons & Equipment of the US Army
0 likes
Like

“I have lived now for over a century, yet I can still say with complete confidence that no one can claim to have plumbed the depths of human misery who has not shared the fore-ends of a submarine with a camel.”
― John Biggins, A Sailor of Austria: In Which, Without Really Intending to, Otto Prohaska Becomes Official War Hero No. 27 of the Habsburg Empire
tags: camel, humor, humour, submarine, ww1
4 likes
Like

“In fact the bare adjective "bad" hardly scratches the surface of the man's awesome incapacity.”
― John Biggins, The Emperor's Coloured Coat: In Which Otto Prohaska, Hero of the Habsburg Empire, Has an Interesting Time While Not Quite Managing to Avert the First World War
tags: humor, humour
2 likes
Like

“It is a curiously moving experience, to hear 350 sailors uttering the words "Oh shit!" in eleven different languages.”
― John Biggins, The Emperor's Coloured Coat: In Which Otto Prohaska, Hero of the Habsburg Empire, Has an Interesting Time While Not Quite Managing to Avert the First World War
tags: humor, humour
3 likes
Like

“Friendship throws out deep roots in honest hearts, D'Artagnan. Believe me, it is only the evil-minded who deny friendship; they cannot understand it.”
― Alexandre Dumas, Twenty Years After
tags: friendship
15 likes
Like

“The one ring road around the airfield is paved, but heavily rutted and potholed. Every few days a street-sweeper makes its way around, polishing the rutted surface with brushes and water.”
― Glenn Dean, Soldier / Geek: An Army Science Advisor's Journal of the War in Afghanistan
tags: afghanistan, military
4 likes
Like

Steve Anderson
author of
A Thousan...