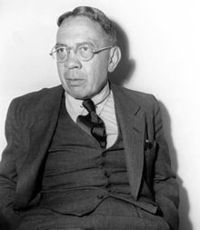 Born
in Ogden, Utah, The United States
January 11, 1897
Died
November 13, 1955
Genre
History
edit data
Bernard Augustine DeVoto was an American historian and author who specialized in the history of the American West.

Trilogy of the West (3 books)
by
Bernard DeVoto

“One may lack words to express the impact of beauty but no one who has felt it remains untouched. It is renewal, enlargement, intensification. The parks preserve it permanently in the inheritance of the American citizens.”
― Bernard DeVoto
tags: america, beauty, nature, parks
15 likes
Like

“They came to Virginia City as soon as the true value of the Comstock was perceived. They constituted, no doubt, a deplorable source of gambling, pleasure and embroilment. They were not soft-spoken women, their desire was not visibly separate from the main chance, and they would have beheld Mr. Harte’s portrayal of them at Poker Flat with ribald mirth. But let them have a moment of respect. They civilized the Comstock. They drove through its streets reclining in lacquered broughams, displaying to male eyes fashions as close to Paris as any then current in New York. They were, in brick houses hung with tapestries, a glamour and a romance, after the superheated caverns of the mines. They enforced a code of behavior: one might be a hard-rock man outside their curtains but in their presence one was punctilious or one was hustled away. They brought Parisian cooking to the sagebrush of Sun Mountain and they taught the West to distinguish between tarantula juice and the bouquet of wines. An elegy for their passing. The West has neglected to mention them in bronze and its genealogies avoid comment on their marriages, conspicuous or obscure, but it owes them a here acknowledged debt for civilization.”
― Bernard DeVoto, Mark Twain's America
2 likes
Like

“The nation had had two symbols of solitude, the forest and the prairies; now it had a third, the mountains.”
― Bernard DeVoto, The Year of Decision 1846
tags: symbols, united-states
1 likes
Like