,
Discover new books on Goodreads
See if your friends have read any of Bret Anthony Johnston's books 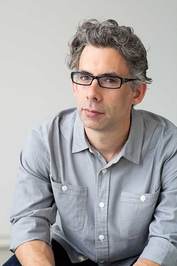 His awards include the Pushcart Prize, the Glasgow Prize for Emerging Writers, the Stephen Turner Award, the Cohen Prize, a James Michener Fellowship, the Kay Cattarulla Prize for short fiction, and many more. His nonfiction has appeared in The New York Times, the New York Times Magazine, The Wall Street Journal, Tin House, The Best American Sports Writing, and on NPR’s All Things Considered.

A graduate of the Iowa Writers’ Workshop, he’s the recipient of a National Endowment for the Arts Literature Fellowship and a 5 Under 35 honor from the National Book Foundation. He wrote the documentary film Waiting for Lightning, which was released in theaters around the world by Samuel Goldwyn Films. He teaches in the Bennington Writing Seminars and at Harvard University, where he is the Director of Creative Writing. ...more

· 11,320 ratings · 1,490 reviews · 12 distinct works • Similar authors
More books by Bret Anthony Johnston…
Quotes by Bret Anthony Johnston  (?)
Quotes are added by the Goodreads community and are not verified by Goodreads. (Learn more)
“The past was a bridge that looked solid and sturdy, but once you were on it, you saw that it extended only far enough to strand you, to suspend you between loss and longing with nowhere to go at all.”
― Bret Anthony Johnston, Remember Me Like This
12 likes
Like

“EVERY WEDNESDAY, I teach an introductory fiction workshop at Harvard University, and on the first day of class I pass out a bullet-pointed list of things the students should try hard to avoid. Don’t start a story with an alarm clock going off. Don’t end a story with the whole shebang having been a suicide note. Don’t use flashy dialogue tags like intoned or queried or, God forbid, ejaculated. Twelve unbearably gifted students are sitting around the table, and they appreciate having such perimeters established. With each variable the list isolates, their imaginations soar higher. They smile and nod. The mood in the room is congenial, almost festive with learning. I feel like a very effective teacher; I can practically hear my course-evaluation scores hitting the roof. Then, when the students reach the last point on the list, the mood shifts. Some of them squint at the words as if their vision has gone blurry; others ask their neighbors for clarification. The neighbor will shake her head, looking pale and dejected, as if the last point confirms that she should have opted for that aseptic-surgery class where you operate on a fetal pig. The last point is: Don’t Write What You Know.

The idea panics them for two reasons. First, like all writers, the students have been encouraged, explicitly or implicitly, for as long as they can remember, to write what they know, so the prospect of abandoning that approach now is disorienting. Second, they know an awful lot. In recent workshops, my students have included Iraq War veterans, professional athletes, a minister, a circus clown, a woman with a pet miniature elephant, and gobs of certified geniuses. They are endlessly interesting people, their lives brimming with uniquely compelling experiences, and too often they believe those experiences are what equip them to be writers. Encouraging them not to write what they know sounds as wrongheaded as a football coach telling a quarterback with a bazooka of a right arm to ride the bench. For them, the advice is confusing and heartbreaking, maybe even insulting. For me, it’s the difference between fiction that matters only to those who know the author and fiction that, well, matters.”
― Bret Anthony Johnston
6 likes
Like

“The strange and scattered pieces of ourselves we leave behind,”
― Bret Anthony Johnston, Remember Me Like This
5 likes
Like

Is this you? Let us know. If not, help out and invite Bret to Goodreads.