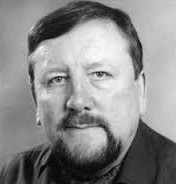 Shaw was noted for his originality and wit. He was two-time recipient (in 1979 and 1980) of the Hugo Award for Best Fan Writer. His short story Light of Other Days was a Hugo Award nominee in 1967, as was his novel The Ragged Astronauts in 1987.

3.81 avg rating — 334 ratings
Quotes by Bob Shaw  (?)
Quotes are added by the Goodreads community and are not verified by Goodreads. (Learn more)
“No amount of standing on hilltops on dark nights and surveying the heavens could prepare a man for the actuality of space travel, because the earthbound observer saw only the the stars, not what separated them. They glittered in his vision, filling his eyes, and he had no choice but to assign them a position of importance in the cosmic scheme. The space traveler saw things differently. He was made aware that the universe consisted of emptiness, that the suns and nebulae were almost an irrelevancy, that the stars were nothing more than a whiff of gas diffusing into infinity. And sooner or later that knowledge began to hurt.”
― Bob Shaw, Ship of Strangers
tags: science-fiction, space-exploration, space-travel
3 likes
Like

“We of the Twentieth Century have abandoned the practice of holding something in reserve when we love our children, assuming – as our ancestors would never have dared to do – that they will reach adulthood as a matter of course.”
― Bob Shaw, Tomorrow Lies in Ambush
2 likes
Like

“Fortune accepted that he could not become a helpless, blameless baby again and yet he was strangely satisfied at the prospect of being carried upwards into the receptive convexities of the clouds.”
― Bob Shaw, Tomorrow Lies in Ambush
1 likes
Like